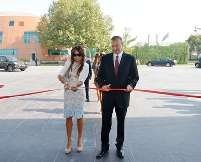 Perhaps the most important event of velvet, not only seasonal, but also politically September, in Azerbaijan became a regular appointment of the first lady Mehriban Aliyeva, head of the organizing committee of the next sports event of international level -  the 4th Islamic Solidarity Games.

The appointment was followed almost immediately after the pompous first European Games, which were held in June this year under her leadership and left the Azerbaijani inhabitant  in double feeling - pride of victory and disappointment for the billions costs.

President Ilham Aliyev announced the new powers of his wife on September 18 almost immediately after his party "Yeni Azerbaijan" published a list of their candidates for the upcoming November 1 parliamentary elections, in which the honor takes Mehriban Aliyeva.

The first lady is running for parliament for the third time, each time strengthening the circle of supporters of the "family" in the legal system of government, and its personal impact, despite the seemingly invisible activity within the walls of Mili Mejlis, is felt more. She is the wife of the head of state, chairman of the Foundation Heydar Aliyev, the head of the permanent various international events in Azerbaijan, Goodwill Ambassador, who is received in the Elysee Palace, and Vatican City.

It's no secret that in the absence of the parliamentary election the observers of the OSCE Office for Democratic Institutions and Human Rights (ODIHR), the results of the parliamentary elections are predetermined,  and parliament smoothly is formed in the scheduled presidential administration format that will strengthen the political and economic influence of the presidential couple's home.

"Democratic Azerbaijan World" (MDA) on June 15 called her their presidential candidate. The announcement came a week after the  party "Yeni Azerbaijan"  nominated their candidate President Ilham Aliyev. All the intrigue that followed one after the other  took place when the United States and others have called into question the possibility of nominating Ilham Aliyev for a third term. The MDA gave up its idea in July, only after the decision on a third term of  Aliyev's presidency was  no longer in  doubts, and his main opponents from the National Council of Democratic Forces no longer provides meaningful competition.

It seems that nothing can prevent the fourth  election of Ilham Aliyev for the presidential Olympus under the current atmosphere of a comprehensive state control over society and the weakness of civil institutions. But the fourth attempt, net less than the third, can cause widespread international censure, especially under adverse economic conditions for the country, marked the end of the oil era, the main trump  of Aliyev in foreign political  arena.

In such conditions, coming of Mehriban Aliyeva to the forefront can become both a necessity and a reality. The West, which considers the third and especially the fourth term politically incorrect, is satisfied with certain castling democratic style Putin-Medvedev,  and  Ilham Aliyev  will retain influence on subsequent events and developments, propping his ally and comrade in the making in the status of the head of state . The most acceptable possibility of maintaining influence may be to strengthening  the party "Yeni Azerbaijan"  chaired by Ilham Aliyev in the government over the majority in the parliament and the executive branch, as well as its use of financial and influential international resources.

Undoubtedly, in such  a case, the First Lady have a chance to pass well-worn path of her husband, who began his ascent to the presidency with international energy, parliamentary and Olympic events.

Mehriban Aliyeva will lead the Organizing Committee of the Islamic Games