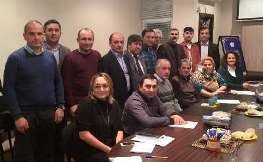 Civil Society Platforms  (CSP) criticized a draft constitutional law, which allows not execute the decisions of the European Court of Human Rights and other international norms. This bill was included the agenda of the spring session of Parliament.

The statement of the CSP about this said that Azerbaijan has officially accepted the jurisdiction of the European Court of Human Rights and the UN Human Rights Committee.

The emergence of this bill demonstrates the authorities' desire to find a way out of a situation where the European Court passes rules confirming the injustice of the judicial system of Azerbaijan.

It is also an expression of the desire of certain circles in Russia to bring a negative practice in Azerbaijan, reads the statement.

Ratification of the Milli Majlis of the European Convention on Human Rights (ECHR), on December 25, 2001, gives it the force of law, standing above national laws.

Therefore, all constitutional and other laws of lower force  adopted now  are  below the force of  Convention. Any act adopted by Milli Majlis, challenging the legality of the decisions of the European Court of Azerbaijan, would be contrary to the European Convention on Human Rights.

The  Article 46 of the European Convention reflects the commitment of Azerbaijan on compulsory execution of European Court decisions. "Therefore, it is necessary to immediately abandon the initiative, contrary to and seriously violates the Constitution, as well as a matter of urgency to remove  this initiative from the agenda of the spring session of the Milli Mejlis," said in a statement PGO.

CSP brings together 26 prominent representatives of independent NGOs and the media.