Anar Mammadli: The situation with the NGOs is depressing 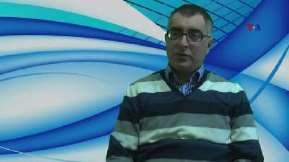 In an interview with "Voice of America" a former political prisoner, the head of the  Election Monitoring  and  Democracy Studies Center  (EMDSC) Anar Mammadli talked about life in prison and the situation of NGOs in the country.

He spent  in prison  2 years and three months ( in the pre-trial jail  in Kurdakhani, and the rest - in the jail №13),  and can compare the conditions. The situation is relatively satisfactory in the jail in  Kurdakhani  because the jail is new, although there arealso some  problems,particularly  violations of sanitary rules, said Mammadli.

In addition, there is a problem with overcrowding, where instead of four people  are kept 6-8 prisoners. The  jail  №13  had problems  with the infrastructure - sewage, electricity, heating, water supply. This is due to the fact that the jail were built in Soviet times and are old.  In the housing for 250 people  there were only  four toilets. With regard to inhuman treatment,  there were not such towards Anar Mammadli and his friends.

"Our rights  were violated to a certain extent, but we  reacted to it immediately. Very big problem was the press. Even as subscribers of a particular publication, we received  it with difficuties. I do not know whether it is possible to consider it torture when a person is deprived of information," Mammadli said. According to him, they were deprived of periodicals  for many days, and some  articles in the newspapers  were cut off. Prisoners had  explain their  rights, but most did not  use this right, noted human rights activist. Comparing the situation with the activities of NGOs in Azerbaijan after his release from prison, Mammadli said that the current activities are equal to "zero", since civil society is strongly weakened. "We, however,  are back in the USSR: the bank accounts have been  arrested, international donor organizations have the status of enemies of the state, the state registration of NGOs is not possible. There is a serious need for reform of both legislation and the existing socio-political practices in relation to civil society," Mammadli said.

Referring to the future of his NGO, Mammadli said, now it is difficult, because they are funded by foreign donors. To resume operation, first of all,  change  of the  law is required, otherwise  the realization of major projects is unreal. We will try to change the social and political situation, as well as relevant regulations. It is necessary to create space for activities. I will act in private: support the release of a political prisoner, monitoring  of their court trials,"  Mammadli said. The authorities must release the remaining political prisoners, as long as there are political prisoners in Azerbaijan, the country will always be under pressure from international organizations. Now Azerbaijan is among the top three countries in the Council of Europe on the number of political prisoners. It is a shame that in the early 21st century many people are in prison because of their beliefs or statements. Therefore, all the healthy forces of society should cooperate and contribute to the release of political prisoners, all to the last man, said Anar Mammadli.

Prisoner on a hunger strike is taken to the closed jail