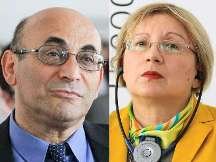 The Observatory for the Protection of Human Rights Defenders, a joint programme of the World Organisation Against Torture (OMCT) and the International Federation for Human Rights (FIDH), has received new information and requests your urgent intervention in the following situation in  Azerbaijan.

The Observatory has been informed by reliable sources about a court decision forbidding Ms. Leyla Yunus, Director of the Institute for Peace and Democracy (IPD) and a member of OMCT General Assembly, and her husband Mr. Arif Yunusov, Head of IPD Conflictology Department, to travel abroad to receive medical treatment.

According to the information received, on March 11, 2016, the Court of Appeals in  Baku ruled that Ms. Leyla Yunus and Mr. Arif Yunus could not travel to  Germany to receive urgent medical treatment due to their suspended prison terms. On February 11, 2016, the Yasamal District Court of Baku had already denied them permission to temporarily leave the country. The Yunus couple said that they would appeal the decision.

Ms. Leyla Yunus and Mr. Arif Yunusov were sentenced to 8,5 and 7 years of imprisonment respectively on August 13, 2015, following a procedure that grossly disregarded international standards of fair trial and due process (see background information). On December 9, 2015, their sentence was commuted to a release on probation for five years.

Mr. Arif Yunusov suffers from hypertension, and Ms. Leyla Yunus from hepatitis, diabetes, pancreatitis and gallstone disease, which were aggravated after her arrest. Both are in urgent need of surgery and medical care. Their medical situation was confirmed by Dr. Christian Witt, from the  Berlin clinic Charite, who visited the Yunus couple in jail while they were in detention and since their release, and confirmed the deterioration of their health status. The Yunus couple could receive urgent and life-saving treatment at the  Berlin clinic Charite.

The Observatory regrets the Court’s decision which puts at serious risk Ms. Leyla Yunus and Mr. Arif Yunusov’s physical integrity, and calls upon the authorities of  Azerbaijan to ensure they can receive urgently the medical care they need including medication and hospitalisation abroad as required.

The Observatory further calls on the Azeri authorities to immediately and unconditionally put an end to the ongoing judicial harassment against Ms. Leyla Yunus and Mr. Arif Yunusov, since it is only aimed at sanctioning their legitimate human rights activities.

Ms. Leyla Yunus has long fought for human rights and the rights of ethnic minorities in her country. She has been heading the IPD since 1995. In October 2014, Ms. Leyla Yunus was awarded the Polish Prize of Sérgio Vieira de Mello, and was among the three finalists for the Sakharov Prize. She also received the distinction of "Chevalier de l’Ordre National de la Légion d’Honneur” of the  French  Republic in 2013. She has worked on numerous projects relating to human rights, political prisoners, corruption, human trafficking, gender-based issues and violations of the right to property. With her husband, Ms. Yunus has also worked towards reconciliation between  Azerbaijan and  Armenia, two countries divided by the conflict in the Nagorno-Karabakh region.

On January 5, 2015 and February 2, 2015, the European Court of Human Rights communicated on two applications filed for violations of the rights of Ms. Leyla Yunus and Mr. Arif Yunusov.

On July 15, 2015, the trial opened in the Baku Grave Crimes Court. During trial, Ms. Yunus and Mr. Yunusov were placed in a glass courtroom cage, with their Azeri to Russian interpreter sitting near the cage (both are Russian-speaking, and the hearings were held in Azeri). Local and international observers were often denied access to the courtroom without explanation and hearings were held in the smallest room of the courthouse.

During the trial, the lawyers of Ms. Yunus regularly argued that continued detention was life threatening to Ms. Yunus, highlighting that Ms. Yunus was suffering from diabetes, hepatitis C, and a liver enlargement and deterioration. The lawyer also denounced the poor conditions of detention of his client at the Investigative prison of the Ministry of National Security, where Mr. Arif Yunusov suffers from insomnia high blood pressure. Throughout the trial, all motions filed by the defence lawyers, including the request to sit next to his clients, were dismissed.

At the hearing of August 3, 2015, an ambulance was called in order to provide first aid healthcare to Mr. Yunusov, who fainted due to a worryingly high arterial pressure. Mr. Yunus later regained consciousness but the doctor of the National Security prison who was called to the court after the health incident, reportedly stated that Mr. Yunusov health condition did not allow him to further participate in the trial. However, the judge decided to adjourn the hearing to the next day, August 4, 2015.