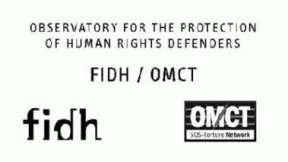 FIDH created the Observatory for the Protection of Human Rights Defenders (OBS) in 1997, in partnership with the World Organisation Against Torture (OMCT). The objective of this programme is to intervene to prevent or remedy to situations of repression against human rights defenders. The action of this programme is based on the conviction that the strengthening of cooperation and solidarity in favour of human rights defenders and their organisations contribute to breaking their isolation and to reinforcing their protection and security.

The Observatory for the Protection of Human Rights Defenders, a joint programme of the International Federation for Human Rights (FIDH) and the World Organisation Against Torture (OMCT), is deeply concerned over the reported health status of three human rights defenders arbitrarily detained in Azerbaijan.

The Observatory has been informed about the serious health condition of Ms. Leyla Yunus, Director of the Institute for Peace and Democracy (IPD) and a member of OMCT General Assembly, whose pre-trial detention was extended until February 28, 2015. The health status of Mr. Arif Yunusov, husband of Ms. Yunus and Head of the Conflictology Department of IPD, also in pre-trial detention, and that of Mr. Anar Mammadli, Chairperson of the Election Monitoring and Democracy Studies Centre (EMDSC), sentenced in May 2014 by the Court on Grave Crimes to 5,5 years’ imprisonment, is also preoccupying.

According to the same information, Mr. Arif Yunusov is also facing poor health conditions, as he is currently on drugs against insomnia, and suffers from high blood pressure. The Observatory recalls that there is very little information available regarding the situation of Mr. Arif Yunusov since he is being held at the Investigative Prison of the Ministry of National Security, the only remaining prison in Azerbaijan which is not subordinated to the Ministry of Justice. This situation puts him at a high risk of facing torture and ill treatment and the absence of a proper medical unit in this prison has been denounced by various international human rights bodies such as the UN Committee Against Torture (CAT) or the European Committee for the Prevention of Torture (CPT).

The Observatory is further concerned over reports regarding the health condition of Mr. Anar Mammadli, who is serving a prison sentence in Jail number 13, located in an unfavourable environment surrounded by polluted waters. As a consequence of water contamination, Mr. Mammadli has developed allergies, and is currently receiving treatment. However, his requests to the prison administration to change cell have remained unanswered.

The Observatory calls upon the authorities in Azerbaijan to ensure Ms. Leyla Yunus’s, Mr. Arif Yusunov’s, and Mr. Anar Mammadli’s physical and psychological integrity by providing them adequate medical care, and calls for their immediate release as their detention only aims at sanctioning their human rights activities, amidst a wave of increasing repression against civil society organisations and representatives in Azerbaijan.