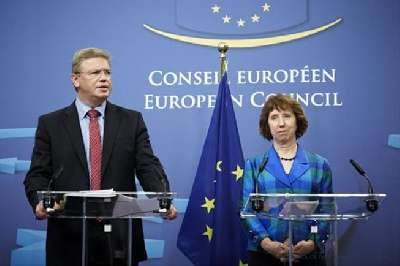 The European Union condemned the increased pressure on civil society in Azerbaijan.

In recent weeks, the steps taken by the authorities of Azerbaijan were evidently primarily directed against activists working for the benefit of human rights, rule of law, fundamental freedoms and public diplomacy. This is stated in a joint statement by the EU High Representative for Foreign Policy Catherine Ashton and EU Commissioner for Enlargement and European Neighbourhood Policy Stefan Fule.

"We are concerned about reports of the arrest of the journalist Rauf Mirkadirov on April 19, detention and interrogation on April 29 of the prominent human rights defenders Arif and Leila Yunus," further said the statement of the high-level representatives of the EU.

Ashton and Füle called on the Azerbaijani government to comply with the obligations in the field of human rights commitments to international organizations.