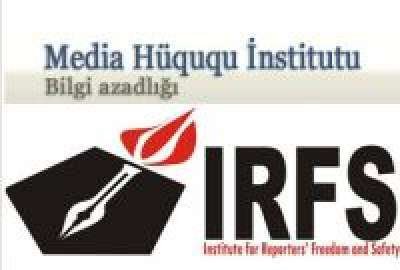 Azerbaijan should promptly revise its libel laws to meet international standards for freedom of expression and the media, Institute for Reporters’ Freedom and Safety (IRFS) and Media Rights Institute (MRI) said today. The organizations call on the Azerbaijan’s Parliament, Milli Meclis to strike down articles 147 (libel), 148 (Insult), 323 (humiliation of honor and dignity of the President of the Republic of Azerbaijan) and 324 (offensive actions against the flag or the national emblem of the Republic of Azerbaijan) of the Criminal Code, that encourage self-censorship, thereby liming free expression.

On February 21, 2014 the Plenum of the Supreme Court adopted the decision on ‘Submission, within the initiative procedure to the Azerbaijan’s Parliament, of proposals to amend the Criminal Code’. The Plenum presented the draft amendments of articles 147 (libel) and 148 (Insult) of the Criminal Code to Milli Meclis with the intention to bring libel laws to the European Court of Human Rights (ECtHR) standards. The new draft amendments to the Article 147 (libel) and Article 148 (insult) have been engineered by the Court and now are set to become a law at the summer session of Milli Meclis.

‘The Plenum, while relying on the position of the European Court highlighted that the preference should be given to the imposition of sanctions not related to imprisonment, considered appropriate the provision of only sentence of fine in Article 147.1 an 148 of Criminal Code’, reads February 21 Decision of the Plenum of the Supreme Court.

‘We welcome Supreme Court’s rhetoric to abolish prison sentence for defamation. However, we find the proposed reform only partial, as (retained) provisions of the Article 147.2 of the Criminal Code envisage, inter alia, up to three years imprisonment for libel committed through accusation of a person in having committed a serious or especially serious crime’, the organizations said.

IRFS and MRI recall that such Article 147.2 (defamation by accusing a person of having committed a grave crime) has already been used against critical journalists in the past, including the famous Fatullayev case, which the European Court found that imprisonment of the journalist under defamation charges, violated the European Convention for Human Rights. Journalist Eynulla Fatullayev was sentenced to two and a half years in prison, on the basis of an article he had written and some postings attributed to him in an Internet forum.

The European Court of Human Rights has found, on several occasions, imprisonment for defamation to be a disproportionate restriction on right to freedom of expression and emphasized that such a penalty has a chilling effect on journalists and media. This also applies to cases when the sentences have not been effectively executed.

The Plenum also adopted recommendations to guide lower courts through the application of freedom of expression provisions in compliance with the case law of the European Court of Human Rights.

‘We have repeatedly called on the Azerbaijani government to amend the outdated defamation laws. There is no justification for retaining criminal defamation in Azerbaijan. Civil laws provide adequate protection and remedies in defamation cases,’ the organizations said.

IRFS and MRI recall that international and regional bodies have long recognized the threat posed by criminal defamation and have recommended that it should be abolished.

Azerbaijan is a party to the European Convention on Human Rights and the International Covenant on Civil and Political Rights (ICCPR), which both provide for the right to freedom of expression. The United Nations Human Rights Committee, which monitors state compliance with the ICCPR, has also stated that imprisonment is not an appropriate penalty for defamation. The UN Special Rapporteurs on the Right to Freedom of Opinion and Expression repeatedly stated in their annual reports that 'penal sanctions, in particular imprisonment, should never be applied.”

In Resolution 1577 (2007), the Parliamentary Assembly of the Council of Europe has called on member states to abolish prison sentences for defamation without delay.

The Azerbaijani Government submitted the latest information on the libel law reform to the Committee of Ministers, which, consisting of representatives of 47 member states, held a discussion on Azerbaijan in its regular human rights meeting on 4-6 March 2014. Its recommendations are yet to come.

IRFS and MRI recall that the draft Law On Protection from Defamation was prepared by Azerbaijani civil society organizations and presented to the Presidential Administration in 2012 at the behest of the OSCE office in Baku.

In September 2012, the government submitted the draft law to the European Commission for Democracy Through Law (Venice Commission) for comment. The text of the draft law was only made public on 22 May 2013, when it became apparent that the government officials clandestinely have taken down key clauses of the bill with the effect of retaining criminal defamation provisions.

The Azerbaijani government failed to implement the provision of the "National Action Program for increasing the efficiency of human rights and freedoms in the Republic of Azerbaijan” for the adoption in 2012 of a new defamation law which would decriminalize defamation.

IRFS and MRI call on the Azerbaijani authorities to live up to the standards and commitments reflected in the European Convention of Human Rights, the Helsinki Accords, the International Covenant on Civil and Political Rights, and the Universal Declaration of Human Rights.