Filippo Grandi - the next UN High Commissioner for refugees 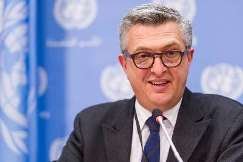 Mr. Grandi will succeed António Manuel de Oliveira Guterres of Portugal, to whom the Secretary-General expressed his utmost gratitude for his tireless efforts and dedication in protecting refugees, displaced persons and stateless people and for bringing the plight of the most vulnerable, and their pursuit of a dignified existence, into the center of the United Nations agenda.

Mr. Grandi was most recently Commissioner-General of the United Nations Relief and Works Agency for Palestine Refugees in the Near East (UNRWA) from 2010 to 2014 and its Deputy Commissioner-General from 2005 until 2010. Having been engaged in international cooperation for over 30 years, Mr. Grandi brings vast experience to his new position from his work in refugee and humanitarian operations and policies, addressing human consequences of major conflicts, encompassing protection, emergency management, donor relations and political affairs.

He served as the Secretary-General’s Deputy Special Representative of the United Nations Assistance Mission in Afghanistan (UNAMA) and has a long-standing career with UNHCR, notably as Chief of Mission in Afghanistan and Chief of Staff in the High Commissioner’s Executive Office at Headquarters. His vast UNHCR field experience includes positions in Sudan, Syria, Turkey and Iraq, having led emergency operations in Kenya, Benin, Ghana, Liberia, the Great Lakes region of Central Africa, Democratic Republic of Congo and Yemen.