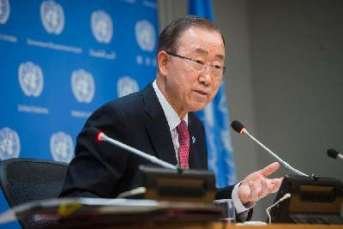 The UN Secretary General Ban Ki-moon urged the Presidents of Armenia and Azerbaijan to prevent the escalation of violence in the conflict zone.

According to the report on the website of the United Nations, the Secretary General hopes that the recent meeting between the Presidents of Azerbaijan and Armenia in Bern gave them an opportunity to agree on the way forward in the peace process.

According to Ban Ki-moon, the Presidents managed to discuss practical steps that will reduce the scale of the violations of the ceasefire and reduce the number of civilian casualties.

The Secretary General welcomed the activities of the OSCE Minsk Group, who organized the summit in Switzerland on 19 December.

"Ban Ki-moon said that the two Presidents expressed their support for the efforts of the Co-Chairs on measures to reduce the threat of violence. He urged the parties to cooperate closely with the Minsk Group to defuse existing tensions and to refrain from any action that could lead to further violence," the report says.