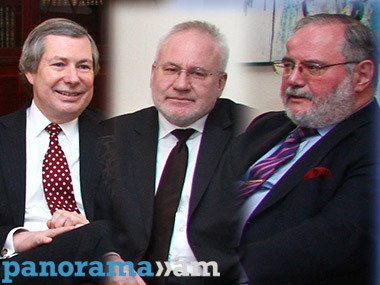 Following their briefing of Minsk Group members in Vienna on April 3, the Co-Chairs of the OSCE Minsk Group (Ambassadors Igor Popov of the Russian Federation, Jacques Faure of France, and James Warlick of the United States of America) met on April 4 with the Foreign Ministers of Azerbaijan, Elmar Mammadyarov, and Armenia, Edward Nalbandian. The Personal Representative of the OSCE Chairperson-in-Office, Ambassador Andrzej Kasprzyk, also participated in the meeting, the OSCE said in a news release.

The Co-Chairs reiterated to the Ministers their commitment to working toward a just and peaceful settlement of the Nagorno-Karabakh conflict. They discussed a possible summit meeting between the Presidents in the near future, and acknowledged the urgency of further progress on the substantive issues.

The Co-Chairs again emphasized to the Ministers the need to take concrete steps to reduce tensions in the region and advance the peace process.