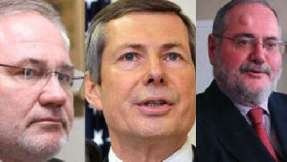 The Co-Chairs of the OSCE Minsk Group (Ambassadors Igor Popov of the Russian Federation, James Warlick of the United States of America, and Pierre Andrieu of France) traveled to the region on February 16-19.  They were joined by the Personal Representative of the OSCE Chairperson-in-Office, Ambassador Andrzej Kasprzyk.

The Co-Chairs met with the Presidents, Foreign Ministers, and Defence Ministers of Azerbaijan and Armenia, as well as the de facto authorities in Nagorno-Karabakh.  The main purpose of the Co-Chairs’ visit was to appeal to the sides to strictly adhere to the ceasefire after a dangerous rise in violence in January, reads the statement of Co-chairs.

In their discussions with the Co-Chairs, the sides confirmed their commitment to the peaceful resolution of the Nagorno-Karabakh conflict.  The Presidents also agreed to consider proposals from the Co-Chairs that could strengthen the ceasefire.

The Co-Chairs discussed with the Presidents and Foreign Ministers next steps towards a settlement, as well as preparations for a future Presidential meeting later this year.

While in the region, the Co-Chairs met with representatives of the International Committee of the Red Cross (ICRC) to discuss issues related to missing persons as a result of the Nagorno-Karabakh conflict.  They noted the importance of the agreement reached during the Presidential Summit in Paris in October 2014 to exchange information on missing persons under the auspices of the ICRC.