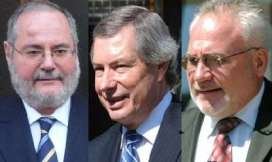 The Co-Chairs of the OSCE Minsk Group (Ambassadors Igor Popov of the Russian Federation, James Warlick of the United States of America, and Pierre Andrieu of France), together with the Personal Representative of the OSCE Chairman-in-Office Ambassador Andrzej Kasprzyk, traveled to the region October 26-28.

Their statement by results of the trip reads:

"We met with the Presidents and Foreign Ministers of Armenia and Azerbaijan, as well as the de facto authorities of Nagorno-Karabakh.

The Presidents confirmed their commitment to hold a summit under the auspices of the Co-Chairs before the end of the year to discuss key elements of a settlement and other issues. We stressed to the Presidents the dangers of violence along the Line of Contact and Armenia-Azerbaijan border. The use of heavy weapons, such as mortars and rocket launchers, is unacceptable and presents a serious danger to the civilian population. We deeply regret the casualties and loss of life among innocent civilians and expect the sides to take every step to avoid violence. We raised existing proposals designed to stabilize the security situation and create a more constructive atmosphere for negotiations.

In Baku, we met representatives of the Azerbaijani community of Nagorno-Karabakh. We encourage dialogue among all those affected by the conflict as an essential part of the peace process, and support programs that bring Armenians and Azerbaijanis together. We also met with the representative of the International Committee of the Red Cross in Yerevan to discuss the implementation of a data exchange on missing persons, a humanitarian measure we fully support.

Immediately after a routine crossing of the Line of Contact by the Co-Chairs, repeated gunfire from an undetermined location forced OSCE monitors to take cover. The sides have made an obligation to guarantee the safety of monitoring personnel. This incident represents a deliberate effort to undermine progress towards a settlement. It also underscores the need for the OSCE to have the ability to investigate violations of the ceasefire”.