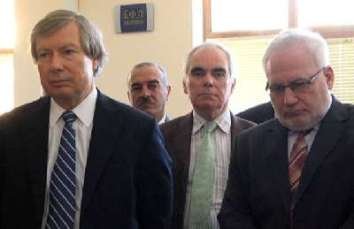 NEW YORK, 25 September 2015 – The OSCE Minsk Group Co-Chairs (Ambassadors Igor Popov of the Russian Federation, James Warlick of the United States of America, and Pierre Andrieu of France), together with the Personal Representative of the OSCE Chairman-in-Office Ambassador Andrzej Kasprzyk, express their serious concerns about Armenian and Azerbaijani forces using mortars and heavy weapons in and around civilian areas.

The use of such weapons represents an unacceptable escalation in the conflict. We express our deepest condolences to the families of the deceased and recognize the casualties on each side of the international border and Line of Contact. We appeal to the sides in the strongest possible terms to avoid civilian casualties. The sides have an obligation under the Geneva Conventions to protect the safety and security of non-combatants.

We regret that these incidents took place on the eve of the agreed meeting of the Armenian and Azerbaijani Foreign Ministers in New York.  We expect the Ministers to have a serious discussion on the escalation of violence and the issues surrounding a negotiated settlement. While we are unable to determine with certainty how the violence originated since each side accuses the other, the parties should work towards an OSCE investigation mechanism as discussed between the Presidents.

We will continue our work with the sides at the highest levels to de-escalate tensions and advance a lasting and peaceful settlement.