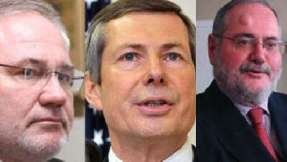 The OSCE Minsk Group Co-Chairs (Ambassadors Igor Popov of the Russian Federation, James Warlick of the United States of America, and Pierre Andrieu of France) traveled to Yerevan and Baku to meet President of Armenia Serzh Sargsian and President of Azerbaijan Ilham Aliyev.  The Personal Representative of the OSCE Chairperson-in-Office Ambassador Andrzej Kasprzyk also participated in the meetings, reads a press release of the MG co chairs.

"During our visit to Yerevan and Baku, we noted recent high-level meetings and discussed with each President current proposals to advance negotiations towards a lasting settlement of the Nagorno-Karabakh conflict.  We welcomed the readiness of the Presidents to meet each other later this year, and they instructed their Foreign Ministers to continue their work with the Co-Chairs on an agenda for the presidential summit.

We also welcomed the period of relative stability along the Line of Contact and Armenia-Azerbaijan border that coincided with major international events in both countries over the last several months.  However, we are concerned about the recent rise in tensions, and we urged the Presidents to avoid a deadly escalation of violence and take all measures to adhere strictly to the ceasefire.

The Presidents repeated their commitment to exchange data on missing persons under the auspices of the International Committee of the Red Cross”, says the press release.