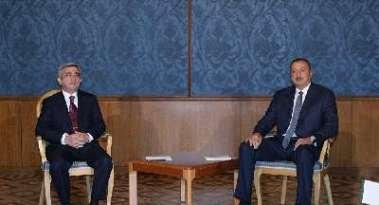 On 18 December the   President Ilham Aliyev arrived in the Swiss city of Bern, where a meeting with the President of Armenia with the mediation of the OSCE Minsk Group will take place on 19 December, according to the press service of the head of Azerbaijan. Previously, James Warlick, the  US Co-Chair expressed the hope that the meeting will achieve a real step towards the settlement of the Karabakh conflict. In the last two weeks the situation on the line of contact between Armenian and Azerbaijani forces was very intense and was accompanied by shootings with artillery, mortars and armored vehicles.  At least 15 people were killed from both sides , and injured even more. Observers hope that the meeting of the Presidents will reduce the  tension.