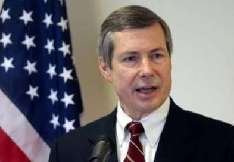 «If large-scale conflict resumes in Karabakh, a negotiated settlement would be impossible," - said in an interview with the Armenian service of Radio "Liberty" American co-chair of OSCE Minsk Group James Warlick.

Parties should try to observe and respect the truce. The worst consequence will be the resumption of violence, which will not serve the peace settlement. The Co-Chairs will not be able to work to reach a settlement, if the conflict expanded, he said.

Warlick said that by the end of the week, he plans to visit Baku.

"Today is the second day of my visit to Yerevan ahead of a meeting with President Sargsian and Foreign Minister Nalbandian, and others. We look forward to a good discussion on further steps related to the Karabakh conflict, one of the next steps will be a meeting of the Presidents. Last October, the two presidents agreed to intensify dialogue. After that meeting, much has changed: the tragedy of the helicopter, an increase in tension on the contact line, as well as the memorial ceremony in Armenia, the upcoming European Games in Baku, religious ceremonies. Because of all this, we were not able to organize a meeting of the presidents. However, the purpose of my visit is part of the current definition of terms of a possible meeting of the presidents and the formation of a range of issues to be discussed by the presidents," said James Warlick.

Asked about the idea to expand the format of the OSCE Minsk Group, Warlick said that the existing format was  accepted by the parties. "If the parties decide to change the format, we will respect their decision. But the problem is not in the format of talks, it is a decision that should take the President and the people of the two countries. It is not a question of size, it is a question of political will. "

Asked what impact can have on the negotiations  the fact that the Azerbaijani authorities  close the OSCE office in Baku, he said that regardless of this the  active work for the peaceful settlement will continue.

G.Warlik: presidents of Azerbaijan and Armenia are committed to peace