G.Warlik: presidents of Azerbaijan and Armenia are committed to peace 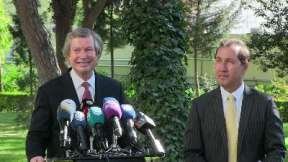 The OSCE Minsk Group is actively engaged in the organization of the  meeting of the presidents of Azerbaijan and Armenia till the end of this year. The current visit to the region, and prior to this meeting in Vienna is connect6ed with it, said the American co-chair of OSCE Minsk Group James Warlick at today's press conference in Baku.

He noted that the mediators during the meetings with the leadership of Armenia and Azerbaijan stressed the need to respect the cease-fire, not the tolerance of violent acts. Warlick believes that there is relative calm in recent months on the contact line, and mediators want to continue this. Keeping peace in the line of contact can contribute to the achievement of the future of mutual trust.

Answering journalists' questions, Warlick confirmed that each time the co-chairs in the debate raised the question of the fate of the Azerbaijani hostages Dilgam Askerov and Shahbaz Guliyev.

Warlick said that the presidents of Armenia and Azerbaijan do not want war, and have demonstrated commitment to peace.

"The important point is the full restoration of confidence between the parties. It must be negotiated. The small steps play n important role  in the establishment and strengthening of the dialogue. One of these steps can be considered  an invitation of Armenian athletes to the European games in Baku. I told President Aliyev that time will come when the Azerbaijani sportsmen will take part in the Games in Yerevan," said Warlick.