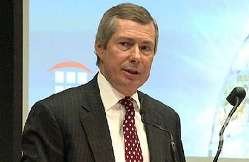 The US co-chair of OSCE Minsk Group James Warlick in an interview with Turan and Voice of America spoke about the current state of negotiations on the Karabakh settlement, the position of the OSCE Minsk Group and the discussions in PACE on Nagorno-Karabakh.

1.       Azerbaijani Government knocked OSCE Minsk Group co-chairs calls on PACE regarding the NK resolution. What was the reason that MG co-chairs called on the PACE? How would you characterize it?

• We do not object to a discussion of the Nagorno-Karabakh conflict in regional and international organizations, and we support Azerbaijan and Armenia’s right to raise the issue as they choose.  The Co-Chairs wanted to emphasize that the Minsk Group remains the negotiation format accepted by the sides.  We hope Armenia and Azerbaijan will remain fully committed to working closely with the Co-Chairs on a negotiated settlement

• As mediators, we believe the only path toward peace is at the negotiation table.  We stand ready to meet FM Mammadyarov at any time to continue our discussions on elements of a settlement.

3.       Are there any differences between the previous negotiations and the present ones? Are there any progresses in the non-agreed long lasting issues including negotiations related to Azerbaijan’s territorial integrity, withdrawal of Armenian military forces from the Azerbaijani territories?

• Our negotiations aim to reach a lasting settlement based on the principles of international law, the UN Charter, and the Helsinki Final Act, particularly the principles of territorial integrity, self-determination, and non-use of force.  The occupied territories will need to be returned to Azerbaijan’s control as part of a comprehensive settlement, which would also include a determination of status for Nagorno-Karabakh.

4.       Can we say that the long lasting Madrid principles negotiations have failed?

• The Minsk Group is the negotiation format accepted by the sides.  We hope the sides will remain fully committed to working closely with the Co-Chairs on a negotiated settlement.

6.       There was a direct negotiation, without mediators, between the Azerbaijani and Armenian Presidents by former Secretary of State Madeleine Albright’s initiative. This ended up with the murder of several senior officials’ at the Armenian Parliament and changes of the Armenian leadership. Do you think that it would be possible for the sides of the conflict to start again the negotiations without mediators?

• We believe any dialogue between the Presidents of Armenia and Azerbaijan is important to making progress in the peace process.  The Co-Chairs have supported the mediation efforts of Secretary Kerry, President Putin, and President Hollande, each of whom held trilateral meetings with the two Presidents in an effort to advance a settlement.