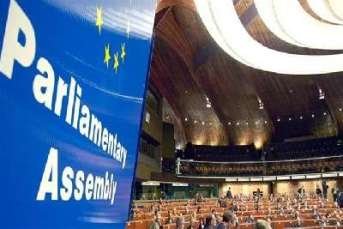 The Co-Chairs of the OSCE Minsk Group – Igor Popov of the Russian Federation, James Warlick of the United States of America, and Pierre Andrieu of France – welcome efforts to find a negotiated settlement to the Nagorno-Karabakh conflict and are prepared to work cooperatively with those committed to a peaceful settlement.  We understand that the Parliamentary Assembly of the Council of Europe (PACE) may consider resolutions on the conflict in the near future and remind PACE, and other regional and international organizations, that the Minsk Group remains the only accepted format for negotiations.  We appreciate the interest paid by PACE members, but urge that steps not be taken which could undermine the Minsk Group’s mandate from the Organization for Security and Co-operation in Europe or complicate ongoing negotiations.

The Minsk Group (MG) of the OSCE called on PACE to refrain from actions which may harm the negotiation process.

"In the near future may discuss PACE resolution on Nagorno Karabakh conflict. We remind the Assembly, as well as other regional and international organizations that the Minsk Group remains the only accepted format for the talks," - said in a statement the co-chairs of the OSCE Minsk on January 22.

"We appreciate the interest of members of the Assembly, but the urge not to take steps that could hurt the mandate of the OSCE Minsk Group or hamper the continuation of the negotiations", - the document says.

At  the PACE session on January 25  in Strasbourg will be made reports: "The increase in violence in Nagorno-Karabakh and other occupied territories of Azerbaijan" and "Cross-border population of Azerbaijan deliberately deprived of water." The first report has been  prepared by British MP Robert Walter, and the second  by the MP from Bosnia and Herzegovina, Milica Markovic.

The Armenian side is making efforts to prevent the approval of the reports.

Earlier, the OSCE Minsk Group called on PACE  not to interfere in the settlement of the Karabakh  conflict.