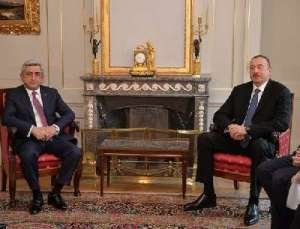 Baku/19.12.15/Turan- ArmInfo:  One –on-one  negotiations between the presidents  of Armenia and Azerbaijan Serzh Sargsyan and Ilham Aliyev or a peaceful settlement of the Karabakh  problem  began on Saturday in Bern. Later, the OSCE Minsk Group and the Personal Representative of the OSCE Chairman Andrzej Kasprzyk will join the heads of state, wrote on his microblog on Twitter a spokesman for Armenian President Vladimir Akopian. The Azerbaijani side has not yet commented on the fact of the meeting.