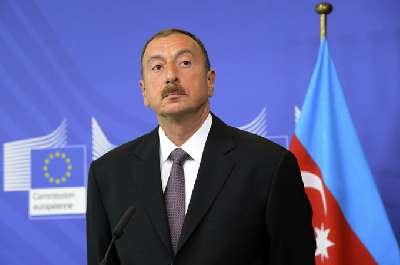 As Azerbaijan's October presidential election approaches, the authorities seem more determined than ever to restrict citizens' access to information through controlling the country's media, taking steps to limit Internet freedom, and making harsh examples of journalists who express critical opinions in order to keep the broader media community in line. Now, it appears that Azerbaijanis are also facing restrictions in accessing broadcast programmes from outside of the country. Several foreign outlets have noted deliberate broadcast interferences, known as jamming, and is a practice that violates both international telecommunications regulations and human rights law.

The state has long dominated the broadcast media in Azerbaijan. Of the country's nine national television stations, three are directly owned by the state, and the six private stations are heavily influenced through the state's control over advertising revenues. The 12 national radio stations also fail to provide a plurality of programming.

The Institute for Reporters' Freedom and Safety has highlighted discrepancies with the allocation of broadcasting licenses, calling the procedure "highly political, biased, and non-transparent", preventing potentially critical media outlets from broadcasting within the country.

Since January 2009, foreign broadcasters have beenbanned from accessing national frequencies in Azerbaijan, a move that took the Azerbaijani services of the BBC, Radio Free Europe/Radio Liberty (RFE/RL), and Voice of America off the air, effectively eliminating the only international sources of broadcast news in the country.

As a result, many Azerbaijanis are exposed only to the state's version of events, which prioritises coverage of President Ilham Aliyev and First Lady Mehriban Aliyeva's activities, idolizes the late former President - and father of the current President - Heydar Aliyev, and heavily skews or completely omits reporting on significant events with political implications, such as anti-government protests or trials of political prisoners.

In the absence of independent broadcasting within the country, satellite broadcasts from outside the country have become increasingly important, providing citizens with valuable access to independent information and a rare glimpse of political views that differ from those of the ruling party.

Since losing the ability to broadcast on national frequencies, RFE/RL has continued to disseminate Azerbaijani-language content online, and in a weekly news magazine programme broadcast into the country via satellite. But now this content is also under threat. On June 20, 2013, RFE/RL reported several instances of jamming with its satellite broadcast into Azerbaijan since Aprli 2013.

In its press release on the disruption, RFE/RL stated, "the current interference has many of the characteristics of deliberate interference. It only occurs during programs in the Azerbaijani language. The interfering signal carries no content, indicating its sole purpose is to disrupt other programming. When the RFE/RL program moves to other channels and satellites, the interfering signal follows".

After RFE/RL experienced disruption again during its broadcasts on June 29 and 30, RFE/RL's Deputy Director of Communications and External Relations, Joanna Levison, commented further on the matter.

"We have experienced targeted interference with our satellite news programming to Azerbaijan that, now after 10 weeks, we have to conclude is deliberate. We have experienced numerous other kinds of attacks on our operations in Azerbaijan, including smear campaigns aimed at discrediting our reporters, to threats, physical attacks, and a government ban barring us from FM broadcasts in 2009. Jamming is a violation of international broadcast treaties, and it's a flagrant violation of international norms and standards governing media freedom. This interference with Azeri citizens' fundamental right to information must be stopped".

RFE/RL is not the only entity to report recent interference with its broadcasting into Azerbaijan; both Meydan TV and Azerbaycan Saati ("Azerbaijan hour") have reported similar disruption. All three broadcasters appear to have been targeted for transmitting alternative news coverage into Azerbaijan.

According to Emin Milli, Director of Meydan TV, the station has only been able to broadcast via satellite once, for the project's inaugural programme on May 15, 2013. Since that time, all subsequent attempts to broadcast have been unsuccessful due to technical difficulties that Milli attributes to jamming. Milli believes that the Azerbaijani authorities view Meydan TV's programming as a threat to their power.

"The current situation in the country is so unstable, the authorities fear that even one hour per week of independent reporting could jeopardise their power", he said.

The International Telecommunications Union (ITU), of which Azerbaijan is a member, prohibits jamming, as stipulated in Article 45 of the ITU's Constitution and Article 15 of the ITU's Radio Regulations. The US-backed Broadcasting Board of Governors, along with a number of prominent international broadcasters, recently issued a statement that expressed concern over growing global reports of satellite jamming and emphasised that "Media freedom has not faced such a concerted campaign of disruption since the end of the Cold War".

The European Broadcasting Union has also repeatedly come on record on the issue and wrote condemningreports of jamming originating in Syria and Iran throughout 2012.

Jamming is also considered as a violation of the right to freedom of expression, which Azerbaijan has committed to respect and protect through its ratification of major international and regional treaties including the Universal Declaration of Human Rights, the International Covenant on Civil and Political Rights, and the European Convention on Human Rights. As ARTICLE 19 points out, deliberate jamming "interferes with both the rights of individuals and broadcasters to receive and impart information".

In addition to violations of ITU regulations and international human rights law, disruptions of satellite broadcasts of independent news coverage in Azerbaijan negatively impacts the chances of October's presidential election being conducted in accordance with international democratic standards. If citizens have no access to information about the true state of affairs in their country and are not exposed to a plurality of political opinions, the electoral process cannot be considered free and fair.

So far, the international community has remained largely silent on the issue, although the US State Department acknowledged the reports, stating: "We have seen reports that RFE/RL and other outlets have encountered difficulties broadcasting satellite programming into Azerbaijan…the United States strongly supports media freedom and freedom of expression in Azerbaijan".

Indeed, RFE/RL - along with Meydan TV and Azerbaycan Saati - provides valuable reporting on current events in Azerbaijan, filling significant gaps in the news coverage available from national broadcasters. The reported disruption to their broadcasting is a serious negative development that should be urgently addressed by international organisations and democratic countries with relations with Azerbaijan, starting by pressing the ITU to investigate the reported interference and take action to address any violations.

But perhaps the possibility that the Azerbaijani government is once again defying its international obligations and using new tactics to silence its critics is simply one more inconvenient truth, another in a long list of issues that will be wilfully ignored to avoid disrupting energy and security relations with an increasingly repressive regime.

Rebecca Vincent is an American-British human rights activist currently based in London. She is a former US diplomat and has worked with a wide range of international and Azerbaijani human rights and freedom of expression organisations.