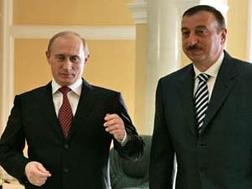 The official date of Vladimir Putin's visit to Azerbaijan has not yet been announced, but the head of the press service of the Russian president, Dmitry Peskov, told VK that preparations for the visit are in full swing. Informed sources in Moscow and Baku confidently say that the Russian leader will arrive in the capital of Azerbaijan, and the next day he will go to Iran.

The programme of the visit of Vladimir Putin can be divided into two parts - political and economic ones. "The arrival of the Russian President neutralizes all the negative estimates and projections which are heard in relation to Azerbaijani-Russian relations. The reason for the assertion of their poor condition was the termination of the tenancy by the Russian side of the Qabala radar station and the refusal of the Azerbaijani side to use the Baku-Novorossiysk pipeline. However, the subsequent supply of arms to Azerbaijan and Russian President Vladimir Putin’s visit showed the failure of such assessments,” political scientist and member of the Milli Majlis, Rasim Musabekov, told the author. According to him, the presidents will have a lot to discuss in Baku – these are inter-state relations, the development and deepening of which are of interest to both sides, regional problems and global issues, including the situation in Syria and Iran. "It should be remembered that Azerbaijan will soon be the chairman of the UN Security Council, so exchanging views between Moscow and Baku is quite important," Musabekov said.

Agreeing in general with this assessment, director of the Center for Political Studies "North-South" Alexei Vlasov also noted that Putin's visit to Baku on the eve of presidential elections in Azerbaijan can be interpreted as support for the incumbent President Ilham Aliyev. The visit is also important because it will make it possible to put the intergovernmental dialogue on a new level. "Recently there has been a lot of negativity in the media field, and even if the presidents do not sign any official documents, and at a press conference limit themselves to general phrases, it will be a bonus for the negotiators on the main tracks of bilateral relations," Vlasov told the author . According to him, the meeting of the presidents will allow getting out "of the game for a fall" and opening the space for those who work in trade, economic and humanitarian dialogue, and those working on the settlement of the Karabakh conflict. "This is like in the case of Georgia. But with Tbilisi everything was really bad, and with Baku there is only a certain coldness," Vlasov said. He also does not rule out the fact that Putin's visit to Baku is a serious geopolitical emphasis, meaning, in particular, the discussion of topics related to Iran, especially because Putin will travel to the Islamic Republic from Baku. "With the advent of the new president of Iran a new form of dialogue is possible in which both Moscow and Baku are extremely keen to ease tensions both around Iran itself and in the projection on the Caspian problem," Vlasov said. According to him, in the practical sphere it is possible to expect continuation of the energy dialogue, especially if the rumours are true that the preparations for the visit of Putin's team actively involve Igor Sechin - the President of Rosneft, who was recently in the capital of Azerbaijan and met with President Ilham Aliyev.

"Moscow, of course, has taken into account that in the global gas field Baku played on the Russian side, choosing the Trans-Adriatic Pipeline (TAP) instead of the Nabucco project in the issue of gas supply to Europe. The first option was clearly not in favour of Russia, and the chosen project will provide bonuses to everyone. Thus, Baku signalled to Moscow that it is ready to continue the relationship in a normal condition, not burdened by the troubles that were caused, for example, by the problem of the Qabala radar station,” Alexei Vlasov said.

Signs of a thaw in relations could be seen at the beginning of July, when the head of the Azerbaijani state oil company SOCAR, Rovnag Abdullayev, announced plans in conjunction with "Rosneft" to participate in projects in Azerbaijan and on the territory of Russia. This was said after talks between the leaders of the companies in Baku and St. Petersburg, where at the end of June an International Economic Forum was held. Recently, a number of agencies spread information that "Rosneft" is looking for the opportunity to participate in the Azerbaijani gas project "Absheron" in the Caspian Sea and said that the issue was discussed by Ilham Aliyev and Igor Sechin, with the participation of the management of the French company Total - a shareholder in the project. The analysts of Reuters believe that if the deal is made "Rosneft" can compete with "Gazprom"in the European market, as the Azerbaijani hydrocarbons are targeted primarily at the European market.

However, all this can be said when specific contracts are signed. Meanwhile, informed sources in Baku tend to believe that during the visit of Vladimir Putin it is unlikely that anything will be signed, because there are no signs of this - usually the signing of important agreements is preceded by discussion of documents in the parliament, and now there are no such signs, at least not yet.

The Russian energy expert, partner of RusEnergy Michael Krutikhin is sceptical about the emergence of joint projects. "So far I do not see any projects that Azerbaijan could offer to "Rosneft ". As far as I know, "Rosneft" did not seek any partners to develop its fields – especially SOCAR. Nobody has any excess. I have a vague assumption that the project may appear to be of a geopolitical nature, as Russia is concerned about the possible "transfer" of the pipe through the Caspian Sea by Turkmenistan to export its gas to Turkey and from there to Europe. To counter these plans , there will be something to prevent such a prospect,” Krutikhin told the author. According to him, in this sense the interests of Russia and Azerbaijan are the same. Baku is interested in the fact that in the Southern Corridor, which Europe wants to open, Azerbaijani gas would go through the accelerated development of the second stage of "Shah-Deniz" and the first stage of the above-mentioned "Absheron". "And taking Turkmen gas on its territory, which hurts their own projects, is not of interest to Baku," Mikhail Krutikhin said.

Shadow Side of Azerbaijani-Russian Trade Cooperation