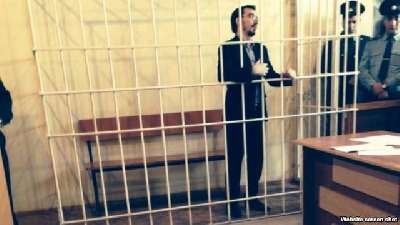 Today the Sabunchu District Court of Baku sentenced a theologian Thale Bagirzade to two years in a strict regime prison, finding him guilty under the Article 234.1 (illegal acquisition or possession of drugs.)
The trail was held hastily: during one day a judge heard the testimony of witnesses, gave the floor to the public prosecutor , who asked to condemn Bagirzade to three years - (the maximum for this Article), and an hour later announced the verdict.

During the trial a lawyer Anar Gasimov, wrote on his page on the social networking site facebook: " Witnesses, police officers, gave testimonies that do not fit with the materials of the investigation. Thus, according to the indictment and protocols drugs were found in Bagirzade’s pants pocket, but at the trial the police said that the drugs were found in his jacket pocket.

After that, the floor was given to the state prosecutor, and break was announced.

The lawyer left the courthouse after the speech of the prosecutor, in sign of protest. In an interview with Turan said he did not want to watch this "tragicomedy and a mockery of justice ."

When asked how Bagirzade perceived performance prosecutor, Gasimov said he was calm and said that he does not care what sentence will be imposed.

Being asked how Bagirzade respond to the verdict, the lawyer said he was calm, and said that he did not care. When the verdict was read one of believers spat at the judge who ordered the guards to detain the believer.

Such a hasty completion of the court trial is due to fears of the authorities of the protests of the believers. Thus, every trial in the case Bagirzade turned to the police a headache because of a large number of the believers arrived to the court.

On October 28 police violently dispersed a large group of people , and detained up to 40 people, and a lawsuit was filed against four of them.

There is no doubt that Bagirzade will be recognized as political prisoners by local and international human rights activists.

* Bagirzade was arrested on March 31 on charges of drug possession , along with his driver Anar Melikov . The latter subsequently was sentenced to one year and seven months in prison on charges of illegal possession of weapons. However, the real reason is a sharp criticism of the government and Ilham Aliyev by Bagirzade.