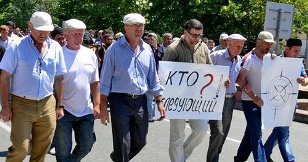 "In theory, this means that the investigators just used all the actions that they could use to solve the crime," Abdurashid Sheikhov has explained the "Caucasian Knot" correspondent. And the advocate continued: "They just do not know what else they can do in regard to the case."

Akhmednabi Akhmednabiev was shot dead on July 9, 2013, in an outskirt of Makhachkala. Investigators had immediately treated his professional activities as the main version of the murder. He became the 17th journalist killed in Dagestan during the past 20 years.

On July 30, the resolution to suspend the preliminary investigation into the murder case was issued by M. A. Omarov, the deputy head of the Investigating Division for the Kirov District of Makhachkala of the Dagestani ID of the ICRF. However, Abdurashid Sheikhov received a printed and certified true copy of the resolution only on September 1.

"It appeared not possible to reveal a person to be brought to justice as a defendant," states the copy of the resolution provided to the "Caucasian Knot" by the advocate.

"They will resume the investigation only in case if they get the updated information on the case, which requires verification," states the advocate about the case of the Akhmednabi Akhmednabiev's murder. He continues: "At present, we have nothing, in particular, no information or facts that could be verified."