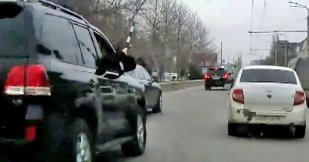 The video clip filmed in Makhachkala by a car registering device and placed on the YouTube, showing a guard beating out of his jeep that accompanied the motorcade with a truncheon the side mirrors of surrounding cars, has caused a great resonance on the Internet. YouTube users assert that the hero of the incident was a security guard from the convoy of the head of the republic Ramazan Abdulatipov.

The clip entitled "Clear motorcade of head of Dagestan" was posted by the user MishkaKG on April 30. Judging from the date, fixed by the video registering device, the incident occurred on April 1. The record shows a cortege of five vehicles, including a police Toyota Camry, a Mercedes and three jeeps, driving along a street in Makhachkala, trying to overtake the passing cars.

The video shows a man sitting in the front seat of the Toyota Land Cruiser jeep that followed the Mercedes, beating with a police truncheon from the window side mirrors of adjacent cars.

The above jeep was equipped with special signalling devices, which are allowed for use in Dagestan only to Abdulatipov, users note.

However, some users have blamed the drivers of surrounding cars for breaking the traffic rules and creating a potentially dangerous situation.

The MIA of Dagestan said that no decision has been taken yet on the incident.

The "Caucasian Knot" has reported about road incidents, where the parties, according to eyewitnesses, were the cars from the motorcade of the head of the republic.