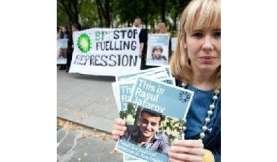 Emma Hughes of Platform, a member of the Sport for Rights coalition, has been detained in Baku airport on her way into Azerbaijan. She has been told she is on a "red list”, had her passport taken from her and will be deported.

In recent weeks, she has been actively campaigning as part of the Sport for Rights coalition, which is working to highlight cases of political prisoners in Azerbaijan in the run-up to the European Games.

She had obtained press accreditation to cover the 2015 Baku European Games, which begin on 12 June, but was denied entry into the country and is being detained in Baku airport. Emma Hughes is a co-editor of Red Pepper magazine and a human rights campaigner with Platform.

The first ever European Games, a subsidiary of the Olympics, have been dubbed the ‘Oil

Emma Hughes of Platform said from detention – "I’m being detained on the orders of the BP-Aliyev regime. I may get deported, but over 100 political prisoners in Azerbaijan face years in jail until the oil-funded regime falls. Civil society has been stamped on hard in Baku. Journalists, lawyers, academics, writers and activists have all found themselves behind bars. And yet the Oil Games carry on regardless. The future of this country is imprisoned, yet BP still work hand in hand with this regime.”

"Emma’s detention at the Baku airport is outrageous. The Azerbaijani authorities have spent a fortune promoting the European Games, and have invited the world to take part in the spectacle. This shows once again that despite their attempts to promote a positive image abroad, there is a more sinister truth behind the glitz and glam. The ruling regime clearly has something to hide when it comes to human rights practices in the country”.