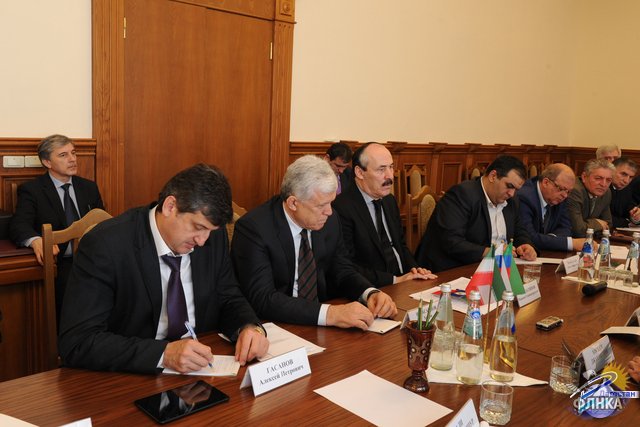 Makhachkala, April 11, 2013. On Wednesday, April 10, the acting Daghestani President Ramazan Abdulatipov met with a delegation from the Islamic Republic of Iran headed by Ambassador Extraordinary and Plenipotentiary of Iran to Russia, Mr. Seyed Makhmud Reza Sadjadi.

Opening the meeting, Ramazan Abdulatipov pointed out long-standing friendly relations between Russia and Iran, including special relationship with Daghestan:

"Daghestan and Iran are closely connected to each other historically. Even in ancient times the Persian Empire somehow influenced Daghestan civilization. Today is very important to us that Iran and Russia have established close ties and good relations".

Collaboration and exchange of experience in regulating inter-religious relations were identified as very important spheres in relations with Iran. "Iran is a country of the Muslim civilization. Daghestan is undergoing complex processes in this meaning. We have full freedom of religion, but not everyone is ready to use the freedom. Sometimes it is used to fight the state and for extremist activities. Daghestanis support the policy of the Russian government to build a secular society without limiting the freedom of religion for different worshipers"- Ramazan Abdulatipov said.

Seyed Makhmud Reza Sadjadi said words of gratitude for the warm welcome in Daghestan and noted that it was not the first time he met with Ramazan Abdulatipov.

Further discussion revealed that Russia and Iran have greatly expanded their political relations: political delegations often visit the countries, which indicates serious intent to fully develop bilateral relations. In this regard, Ramazan Abdulatipov and Seyed Makhmud Reza Sadjadi discussed ways to intensify the mutually beneficial economic cooperation during this meeting.

While discussing issues on foreign economic trade cooperation, Iran suggested some ideas including export of Iranian goods to Daghestan.