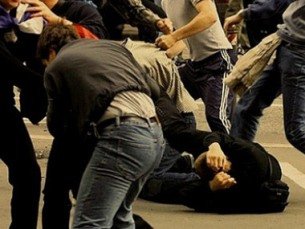 Yesterday at night the relatives of Azerbaijani Defense Minister Zakir Hasanov started a mass brawl with the relatives of Communications Minister Ali Hasanov, reports the Azerbaijani portal "Minval."
It is reported that the incident occurred on 25 December, at night, and the Ministry of Internal Affairs "still does not know."

Portal writes that the mass brawl took place at the international airport after Heydar Aliyev in Baku. The incident occurred on December 25, at night. Thus, difficulties arouse between the conflicting groups in Sheremetyevo airport at Moscow, and continued after the plane landed in Baku.

The parties of the dispute continued fighting in melee, even after reaching the airport parking lot where their cars were located. Among the fighters appeared, the defense minister’s uncle's son Zakir Hasanov. According to the information his leg was broken, and he received various injuries. The brother-in-law of the Minister of Communications and Information Technology was in another group.

Another relative of the defense minister was involved in the fight as well - Deputy Chief of the Baku Police, Major General Elkhan Hasanov’s son. In its turn, the deputy of the press secretary of the Interior Ministry Ehsan Zahidov stated that no information about the incident was received, writes the portal.

Defense Minister continues to communicate with the ambassadors