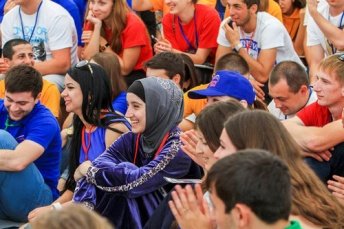 On August 5, the fifth annual North-Caucasian Youth Forum "Mashuk-2014" was opened in Pyatigorsk, the Stavropol Territory, reports its organizing committee.

More than 2500 young people from seven subjects of the North-Caucasian Federal District (NCFD), including 640 residents of the Stavropol Territory, are taking part in the forum that will last till August 17.

In the evening on August 5, Pyatigorsk hosted a ceremonial opening of the Forum "Mashuk 2014", followed by a concert, the official website of the organizing committee in the social network "VKontakte" reports.

This year, the forum will discuss the issues of creating a positive image of the NCFD, improving the business climate, and opposing the information threats.

The Forum "Mashuk" is an important event both for the NCFD and for Russia, since "top-ranking officials treat the forum as one of the most important elements of the country's youth policy," the "Interfax South" reports quoting Sergey Melikov, the Presidential Envoy to the NCFD, who spoke at the opening ceremony.

Police detained perpetrators of the terrorist act in Pyatigorsk