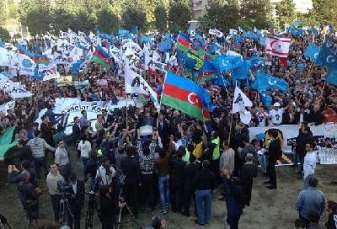 The National Council of Democratic Forces (NCDF) appointed a protest against the economic policy of the authorities, a rise in prices due to the sharp devaluation of the manat for 15 March. This decision was taken at a meeting of the Coordinating Center (CC) NCDF on 28 February.

During the meeting it was noted that as a result of one-sided economic development of the country, ineffective use of oil revenues, a sharp devaluation of the manat and a rise in prices, a long-awaited economic decline began in Azerbaijan. In protest against this "unfit policy" they decided to hold a rally on March 15 under the slogan "End robbery!". Baku City Executive Power will be sent the appropriate treatment.

The members of the CC also strongly condemned the murder of the Russian politician Boris Nemtsov.

NCDF regarded the beginning of a tax audit of the activities of the investigative journalist Shahveled Chobanoglu as political order from the authorities.

NCDF demands the release of these individuals and other political prisoners, said the NCDF press release.

Opposition Appoints Rally for May 3

Opposition Appoints Rally for May 3