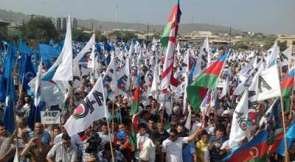 The Coordination Council of the National Council of Democratic Forces of Azerbaijan (NCDF) considered organizational matters for the rally scheduled for 15:00 on March 15 under the slogan "End plunder!"

The rally sanctioned by the city authorities will be held at the stadium Mahsul. NCDF intends to ensure the participation of thousands of people to protest the failed economic policies of President Aliyev’s administration.

The main slogans of speakers will address the crisis caused by the decision of the state of the 33% devaluation of the manat on February 21 this year, which by a third depreciated deposits and savings in manats, jeopardized the banking system, triggered a rise in prices and created a threat of hyperinflation.

The Chairman of NCDF Jamil Hasanli expressed hope that the slogans and demands, which will be announced at an opposition rally, will be heard across the country and will have an impact on the subsequent decision of the government and the people.

The Chairman of the Popular Front Party Ali Keremli informed the sharp activation of pro-government hacker groups that attack the activists’ Facebook profiles. So was hacked the profile of Jamil Hasanli, on behalf of which they began to spread the message about the refusal to hold a rally or a ban from the Baku executive power.

But, as noted, these actions were a sort of boomerang, as the theme of the meeting and the controversy surrounding the authorities' criminal decision on devaluation of the manat became leading in the social network, which would provide an additional citizen participation in the rally.

NCDF after the devaluation of the manat already promptly stepped against the decision of the Central Bank on the devaluation of the manat, and demanded that the country's leadership take a number of steps to address the legitimate interests of defrauded citizens. In particular, the National Council demanded to compensate losses of citizens and the banking system, as well as entrepreneurs who are burdened with business loans.

NCDF last held a rally on November 9, 2014, demanding the release of political prisoners. This requirement, as well as other political demands will be also announced at the March 15 rally.