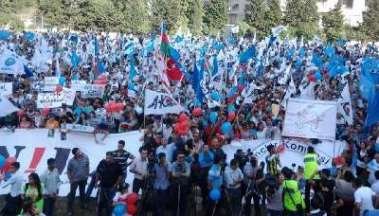 The Coordination Center for the National Council of Democratic Forces of Azerbaijan (NCDF) on Friday discussed the program for the Sunday rally in support of political prisoners.

They discussed the main points and messages to society about the beginning of the struggle for the transformation of Azerbaijan into the country without political prisoners, on the inadmissibility of persecution on political grounds.

The rally organized by NCDF will be held Oct. 12 from 15:00 to 17:00 at the stadium Mahsul in the Yasamal area. The power after a long break allowed the opposition for the first time this year to hold a mass event.

The Chairman of the National Council Jamil Hasanli told Turan that thousands of people through social networks have already expressed their willingness to take part in the rally.

In Azerbaijan, there are more than a hundred political prisoners. Over the past two months there have been arrested many leading human rights defenders and civil society activists.

In response, criticism of President Aliyev’s administration by the European Union and the United States increased.