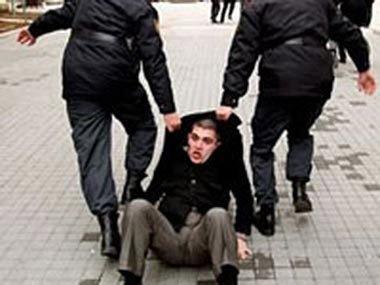 A rally was held on Sunday at the stadium "Mehsul" in Yasamal district in Baku, despite the heavy rain, a rally was held, demanding the cancellation of the results of the presidential election on October 9 and appointing new elections. The rally was organized by the National Council of Democratic Forces (NCDF), Azerbaijani Turan news agency reports.
The NCDF presidential candidate Jamil Hasanli went to the tribune accompanied by youth leaders, with speeches expressing the view that it was Hasanli that won the election, while the results were rigged.

Hasanli stated that the Azerbaijani authorities had disgraced themselves by falsifying the elections on October 9. However, he continued, the democratic forces exposed the actions of the Azerbaijani authorities and the evidence of that was the hasty inauguration. "They were forced to hastily hold this quasi inauguration immediately after the announcement of their fake victory by the Constitutional Court. Nowhere else in the world was the inauguration of the president held in secret from the local and international community," stated Hasanli .

Hasanli called the appointment of former ministers to the new government the desire of the authorities to continue the corruption and tyranny.

Next Hasanli focused on the issue of political prisoners who are more than 20 people - opposition and youth activists, human rights defenders and journalists. He also stated that members of PACE and the European Parliament that gave a positive assessment of the falsified elections would be exposed in their countries.

Hasanli also urged the participants to arrange a public reprimand of the rigged elections in Azerbaijan. "This government is illegitimate, it should go away and it will," said Hasanli.

Hasanli’s and other speakers’ speeches was welcomed with the slogans of "Resign! ", " Ilham go!", "Jamil Bey, we are proud of you!" etc.

The resolution of the meeting put forward the following demands: to release the political prisoners, to take into account the views of local and international awareness of the elections and to stop the pressure on the newspaper Azadlig.

According to the organizers, the rally was attended by more than 10,000 people. The action took place without incident. The organizers called on protesters not to announce slogans outside the stadium at the end of the meeting and this appeal was heard.