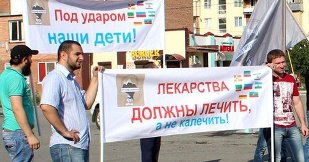 According to organizers, about 6000 people took part in a one-day action "Against 'Lirika'" held on June 28 in the North-Caucasian Federal District (NCFD). The drugs "Lirika", "Zaldiar" and "Tropikamid" are legally sold in pharmacies. In medicine, "Lirika" is used as an anticonvulsant and is not on the list of narcotic drugs, but it is highly addictive, causing drowsiness, confusion, destroys the nervous system, brain and internal organs. Last December, the representative of the Russian Federal Drug Control Service (know as UFSKN) for Kabardino-Balkaria stated the need to put "Lirika" to the subject-quantitative account. "The united day against 'Lirika' was announced by the Russian Congress of Peoples of the Caucasus (RCPC) jointly with the Federal Project 'Sober Russia' with the support of the Office of the Plenipotentiary Representative of Russian President in the North-Caucasian Federal District (NCFD) and regional authorities. The largest actions took place in the cities of Grozny and Cherkessk, Sultan Togonidze, the deputy chairman of the executive committee of the RCPC and the head of the Committee for Youth Affairs, told the "Caucasian Knot" correspondent. "Non-medical use of drugs by drug-addictive people is exaggeratedly expressed in all regions of the NCFD," said Togonidze. In May, the permanent office in the NCFD set up a working group to counter "the pharmacy drug addiction"; it will seek for strict accounting and control of the spread of narcotic drugs and psychotropic substances.