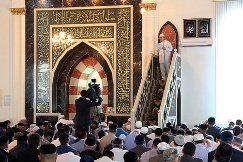 Residents of the subjects of the North-Caucasian Federal District (NCFD) have celebrated the Muslim holiday of Eid ul-Fitr (Uraza Bayram), which marks the end of the fasting during the holy month of Ramadan.

"Our Republic has some 60-70 mosques. Their capacity is from 400 up to 4500-5000 believers. Each of them was packed during the holiday prayer," said Kharun Torshkhoev, the assistant-adviser to the head of Ingushetia on religious matters.

According to his story, nowhere in Russia the holiday is marked at such scale like in Ingushetia.

The "Caucasian Knot" has also reported that on July 27 Ingushetia ended its ten-day-long charitable action, during which the motorists, driving along the Federal Highway "Kavkaz" were given food parcels for breaking the Ramadan fasting.

The republic announced July 28 to be a day-off because of Eid ul-Fitr.

The Eid ul-Fitr was celebrated by tens of thousands of Muslims, the celebration was peaceful, said the spokesman of the Spiritual Administration of Muslims (SAM) of the republic.


Celebrations of Eid ul-Fitr began in the republic in the morning on July 28. All the mosques held festive namazes (prayers), which were attended by thousands of Muslims.

In Dagestan, four days – from July 26 to July 29 – were announced to be days-off in connection with the Constitution Day of the Republic and Eid ul-Fitr.

On July 28, in all the Muslim communities of the republic held festive prayers. Believers were congratulated by the head of the republic Taimuraz Mamsurov. On the eve of the holiday, as noted by the Republic's SAM, poor residents of Vladikavkaz received about 400 grocery parcels.

Believers welcomed the morning of July 28 in mosques, where they took part in collective prayer. According to the press service of the head of Chechnya and the Chechen government, people of the district visited the grave of the first Chechen President Akhmad Kadyrov.

Besides, on the day of Eid ul-Fitr, residents of all settlements of the republic made the traditional donation – Zakat-Fitr – for organization of the holiday for the poor and the needy, said the website of the head of Chechnya.

In Chechnya, the celebration of Eid ul-Fitr will last for three days. According to a police source, on the eve of the holiday, the republic introduced the strengthened security measures. Local residents confirm the reinforcement of power agents' control.