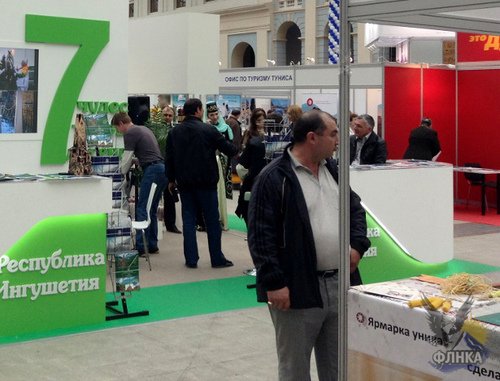 In Moscow, the "Gostinny Dvor" Exhibition Centre hosted the Moscow International Travel Fair "MITF-2014", where residents and guests of Moscow had the opportunity to get acquainted with the offers of the leading Russian and international tour operators and to book tours at special discounted rates. Representatives from two North-Caucasian republics Ingushetia and Dagestan have noted an increased interest of the visitors in their region.

The Travel Fair was organized by the Government of Moscow and the Russian Ministry of Culture. Ingushetia took part in such an event for the first time. This was reported by Stanislav Aristov, Chair of the Committee for Tourism of the Republic of Ingushetia.

"The new project of '7 Wonders, 7 Tours, 7 Legends' invites visitors to get acquainted with the amazing history, unique monuments of architecture, and culture of Ingushetia," the "Caucasian Knot" correspondent was told Stanislav Aristov.

According to the official, throughout the three-day exhibition, visitors showed great interest for products exposed by Ingushetia.

The Dagestani delegation takes part in the tourism fair not for the first time, and it also notes the increased interest of the visitors. This was reported by Muslimat Khalimbekova, Deputy Chair of the Committee for Tourism of the Republic of Dagestan.

"Of course, we have been repeatedly asked about whether it is safe to visit Dagestan. I would like to emphasize that no tourist was ever hurt in our republic," the official has stated.

Dagestan expects a sharp increase in the growth of inbound tourism. However, according to Muslimat Khalimbekova, this growth will take place only if Dagestan manages to overcome the "artificially created" negative image of the republic.