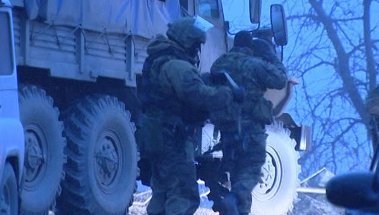 MOSCOW, December 28 (RIA Novosti) – Law enforcement officers on Saturday killed a suspected militant in the Russian North Caucasus republic of Dagestan, the National Antiterrorism Committee (NAC) reported.
The suspect was killed when he attempted to break out of a building where he was blocked during a special operation. He was preliminarily identified as Islam Atiyev born in 1990, a member of terrorist leader Doku Umarov’s gang that acted in the neighboring republic of Chechnya, the NAC said.
Atiyev is believed to have made numerous attempts to kill law enforcers.

The gang leader, Umarov, is an Islamist militant who has claimed responsibility for numerous deadly attacks on civilians, including blasts in the Moscow subway in 2010 and an explosion in the Domodedovo Airport in 2011. Law enforcers reported that he could have been killed an operation in Ingushetia in March 2013.

More than a decade after a war against Islamist separatists ended in the neighboring republic of Chechnya, Russian security forces and police continue to fight militants in the volatile region.

The Islamist insurgency, once confined largely to Chechnya, has spread across the North Caucasus as attacks on security forces, police and civilians are reported regularly in the nearby republics of Dagestan, Ingushetia and Kabardino-Balkaria.