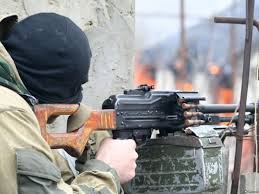 Azerbaijani native Tural Ataev, the leader of Khasavyurt militants, was killed during the special operation held on Tuesday in Dagestan. This was reported by the National Antiterrorist Committee (NAC). In total, six persons were killed and two others were wounded during the battle.

Earlier, a source from the law enforcement agencies has reported that four militants and one fighter of special forces were killed in the special operation conducted in the village of Pervomayskoe of the Khasavyurt District. Three men killed during the assault were pre-identified as Akhmed and Shamil Yakhyaev brothers and 25-year-old Akhmed Magomedov.

"As a result of armed clash, five criminals were neutralized. They have been pre-identified. Their number includes Tural Ataev, born in 1988, a native of Azerbaijan, the leader of the so-called 'Khasavyurt' criminal grouping, who was one of the organizers of the terror act in Pyatigorsk in last December," the RIA "Novosti" quotes the NAC's report as stating.

On the place of the armed clash, weapons and ammunition were found, the ITAR-TASS reports.

In Dagestan, border guard perished in avalanche, and two others injured