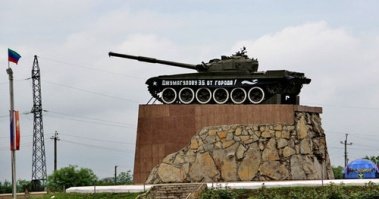 During the week of June 1-7, 2015, at least five persons suffered in the armed conflict in Northern Caucasus. Of them, three persons were killed, and two others were wounded. These are the results of the calculations run by the "Caucasian Knot" based on its own materials and information from other open sources. All the killed persons were, according to the law enforcement bodies, suspected members of the armed underground. Of them, one was killed in Dagestan, and two in Kabardino-Balkaria. Attacks on law enforcers At night of June 3, in the Suleiman-Stalsky District of Dagestan, an armed clash occurred during a special operation carried out not far from the village of Nyutyug. Unidentified men opened fire on law enforcers, when they were combing the area. Two law enforces were wounded during the shootout. At night of June 6, not far from the village of Komsomolskoe in the Khasavyurt District of Dagestan, law enforcers stopped a car to check documents; however, a man in the car rendered resistance to them. A shootout occurred, and as a result, the driver of the car was killed. According to a source in the law enforcement bodies, the killed man was identified as Suleiman Zainulabidov, the leader of the "Aukh" grouping of militants, who had sworn to the terrorist organization "Islamic State". Special and counterterrorist operations On June 3, law enforcers blocked the village of Kharachi in the Untsukul District of Dagestan. At 11:00 a.m., the counterterrorist operation (CTO) regime was introduced in the Untsukul District. Local residents reported on fire activities in the village of Kharachi, including gunfire from large-calibre weapons, and on helicopters in the sky above the village. According to the local residents, fire emergency team and ambulance were called to the village. On June 4, at 10:00 a.m. Moscow time, the CTO regime was cancelled. On June 5, at 5:00 a.m. Moscow time, a CTO regime was introduced within a part of the Baksan District of Kabardino-Balkaria. At 5:30 a.m. Moscow time, two suspected militants were killed during a shootout not far from the village of Atazhukino. When offered to surrender, they opened fire on law enforcers and were killed by return fire. The CTO regime was cancelled at 8:00 a.m. Moscow time. Detentions On June 1, during the verification of the operational information, law enforcers detained a 30-year-old resident of Grozny, suspected of aiding and abetting members of illegal armed formations (IAFs). According to the law enforcement bodies, he has confessed that two years ago he gave money to members of the armed underground. On June 2, in the village of Bratskoe of the Nadterechny District of Chechnya, staff members of the Ministry of Internal Affairs (MIA) carried out a special operation together with staff members of other law enforcement bodies and soldiers of interior troops. As a result, they detained two local residents, suspected of aiding and abetting members of IAFs. The detainees are suspected of the fact that in 2013, they rendered assistance to members of the armed underground by providing them with financing and purchasing military equipment for them. According to the law enforcement bodies, during interrogation, both detainees confessed to aiding and abetting the IAF members. On June 3, at 2:30 p.m., Akhmed Kutbudinov, a resident of the village of Kharachi of the Untsukul District, was kidnapped by people in black uniforms near the diagnostic centre in Makhachkala. According to his family members, when Akhmed Kutbudinov came out of his car, unidentified people in masks approached him, forced him into their Priora car and drove him away to some unknown destination. In the evening of June 4, it has been reported that Akhmed Kutbudinov has been detained and that he is being kept at the OVD (Interior Division) of the village of Shamilkala of the Untsukul District of Dagestan. Officials from the Untsukul ROVD (District Interior Division) have refused to comment on the detention of Akhmed Kutbudinov. On June 5, a 53-year-old resident of the Nadterechny District of Chechnya was detained in the course of operative-search activities. The police assume that in 2014, the detainee rendered assistance to IAF members operating in Chechnya and provided them with food and housing. According to the Chechen MIA, the detainee confessed to aiding and abetting militants.