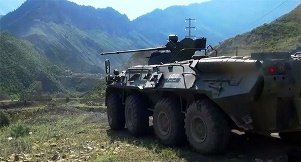 During the week of June 29-July 5, 2015, at least five persons were killed in the armed conflict in Northern Caucasus. These are the results of the calculations run by the "Caucasian Knot" based on its own materials and information from other open sources. The death toll includes four suspected members of the armed underground. Of them, two were killed in Dagestan, and two in Kabardino-Balkaria. One law enforcer was killed in Dagestan. Special and counterterrorist operations At 3:00 a.m. Moscow time of June 30, the counterterrorist operation (CTO) legal regime was introduced in the residential district of Iskozh in Nalchik, the capital of Kabardino-Balkaria, within the territory bounded by Musukaev, Chechen, Nedelin, and Ashurov Streets. In the course of verification of the operational information, law enforcers blocked two armed men in an apartment in the house No. 30 in Ashurov Street. When offered by the law enforcers to surrender, the suspected militants opened fire and activated an improvised explosive device (IED), and thereby the law enforcers opened return fire. As a result of the armed clash, the suspected militants were killed. In the course of the special operation, none of civilians and law enforcers was injured. The killed men have been preliminary identified as active members of one of the illegal armed formation (IAF), a structural unit of the "Imarat Kavkaz", which was declared a terrorist organization. The CTO regime was cancelled at 8:15 a.m. Moscow time. At 3:00 a.m. Moscow time on July 3, the CTO regime was introduced in the Kizilyurt District of Dagestan. Law enforcers discovered a summer militants' base with an arranged dugout in a wooded area between the villages of Nechaevka and Matseevka. Earlier, local residents have reported to the law enforcers that they saw armed people. The militants' base was blocked. On July 4, when special fighters carried out a special operation in the above mentioned wooden area, they were fired from automatic weapons. As a result of the shootout, a fighter of the special unit of the Russian Internal Troops of the Ministry of Internal Affairs (MIA) and two suspected active members of the so-called Kizilyurt grouping were killed. At the place of the special operation, the law enforcers found an arsenal of submachine guns, grenades, guns and ammunition, and more than 20 kg of explosive substance and detonators. At 12:00 a.m. on July 5, the CTO regime was cancelled in connection with the completion of the special operation. At 3:00 p.m. Moscow time on July 3, the CTO regime was introduced in the Derbent District of Dagestan. Law enforcers take measures to search and neutralize members of the extremist underground, their accomplices and supporters. Detentions On June 29, in the Staropromyslovsky District of Grozny, staff members of the Chechen MIA detained two local residents suspected of aiding and abetting members of illegal armed formations. Two local residents, 42-year-old and 36-year-old men, were detained in the course of operational and search activities. According to the police, the detainees used to render assistance to Baidulaev and Usmanov, members of the IAF, who were murdered on June 26 in Grozny, while they offered armed resistance. Law enforcers believe that the detained Grozny residents supplied militants with food and money and also provided them with shelter for nights.