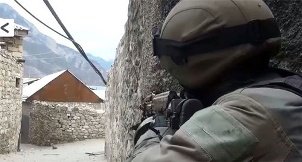 During the week of December 14-20, 2015, at least 7 persons suffered in the armed conflict in Northern Caucasus. Of them, four persons were killed, and three others were wounded. These are the results of the calculations run by the "Caucasian Knot" based on its own materials and information from other open sources.

The death toll includes four suspected members of illegal armed formations (IAFs): three in Dagestan and one in Kabardino-Balkaria.

In the evening of December 14, in Nalchik, at the intersection of Chernyshevsky and Osipenko Streets, law enforcers stopped two men for inspection. One of them opened fire on the law enforcers from a pistol of 9-mm calibre, and after that he was killed by return fire. The second man was detained. During the shootout, none of civilians or law enforcers was wounded. The killed and detained men have been identified. According to the Russian FSB Department for Kabardino-Balkaria, the men were engaged in extortion of money from entrepreneurs, residents of the city of Nalchik and the Baksan District. According to the law enforcers, the extorters used the money to finance the armed underground, acting within the territory of Kabardino-Balkaria.

On December 16, in the Kizilyurt District of Dagestan, two shootouts occurred, in which three persons were killed. At 9:50 a.m. Moscow time, in Kizilyurt, in the course of operational and search activities, policemen tried to stop a VAZ-21099. However, the driver failed to obey the policemen's request. He and his passenger opened fire on the policemen. Two members of the terrorist grouping were neutralized by return fire. They were identified as Nuzhidin Zubairov, born in 1981, and Shamil Gadjiev, born in 1978. In the course of verification of the operational information in the village of Komsomolskoe in the Kizilyurt District, policemen tried to stop a VAZ-21720 car; however, a man opened fire from the car. The attacker was killed by return fire. As a result of the shootouts, none of the policemen suffered. Relatives of the killed men denied the law enforcers' statements that the victims were accomplices of militants. Relatives demand to give out the bodies of the killed men for burial.

At 11:20 a.m. of December 14, the counterterrorist operation (CTO) legal regime, which had been introduced earlier in three villagers of the Tsumada District of Dagestan, as well as in the area of Mount Alak, was cancelled. Till present, the results of the special operation have not yet been reported.

At 0:05 a.m. Moscow time of December 16, near the village of Musaim in the Derbent District of Dagestan, unidentified attackers opened fire from an unknown type of weapon on a Ural-43206 firefighters' car with five staff members of the Ministry for Emergencies (MfE). The police are searching for suspects. One of three firefighters, who had been wounded during the shelling, received ambulatory medical care. According to the head of the traumatology ward, the state of the firefighters is stable, and there is no threat to their lives. The firefighters were called to extinguish the fire in the building of the Musaim village administration. The building burned down completely.