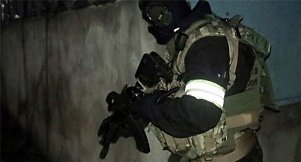 During the week of January 11-17, 2016, at least six persons fell victim to the armed conflict in Northern Caucasus. Of them, four persons were killed, and two others were wounded. These are the results of the calculations run by the "Caucasian Knot" based on its own materials and information from other open sources.

All the killed persons were suspected members of the armed underground: three in Kabardino-Balkaria and one in Dagestan.

At 4:00 a.m. Moscow time of January 11, the counterterrorist operation (CTO) legal regime was introduced in the village of Kvanada of the Tsumada District of Dagestan. Law enforcers blocked a house with a yard, from which unknown attackers opened fire on them. As a result of the shootout, one of the militants was killed. He has been identified as Magomed Abdulkhalikov, the leader of the "Tsumada" criminal grouping, who had been on the federal wanted list since 2014. Another militant was wounded during the shootout. He managed to escape, and the law enforcers organized the search for him.

At 4:25 p.m. of January 15, the CTO legal regime was introduced within the territory of Nalchik, bounded by B. Khmelnitsky, Idarov, Furmanov, and 9th January Streets. A group of militants was blocked in a private house. As a result of the talks, mother of one of the militants left the blocked house. The woman tried to persuade her son to surrender, but did not succeed in her efforts. In the course of the shootout, two militants were killed. The special operation was suspended because of nightfall, and it was resumed in the morning of January 16. The law enforcers again offered the man blocked in the house to lay down his arms and surrender; however, he opened fire and was killed. During the storming of the blocked house, one of the law enforcers was wounded and hospitalized. At 10:35 a.m. of January 17, the CTO legal regime was lifted.