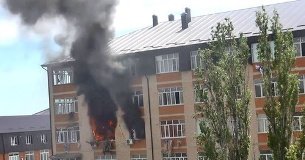 During the week of May 4-10, 2015, at least 3 people were killed in armed conflict in Northern Caucasus. No wounded were reported. These are the results of the calculations run by the "Caucasian Knot" based on its own materials and information from other open sources.

All the killed persons were suspected members of the armed underground in Dagestan.

At 6:00 a.m. Moscow time of May 7, in the southern part of the Soviet District of Makhachkala, a legal regime of counterterrorist operation (CTO) was introduced in the territory bounded by Gamidov, Timiryazev and Sulak Streets and the October Revolution Channel. During the special operation, power agents blocked a multi-storey residential building in Zoya Kosmodemyanskaya Street, where members of armed underground were hiding in one of the apartments. Residents were evacuated. The power agents started negotiations with the blocked members of the armed underground and offered them to lay down their arms. As a result of the negotiations, Patimat Begova, a wife of one of the men hiding in the apartment, left the building. The further negotiations did not succeed, and the men, who remained in the house, opened fire. In the course of the subsequent assault of the building, three suspected members of the armed underground were killed. At 11:00 p.m. Moscow time of the same day, the CTO regime was cancelled. The men killed in the special operation have been preliminary identified as Zaur Begov, Abumuslim Gasanov, and Mirzabek Idrisov.