What does the Council of Europe expect from the project "Freedom of expression and media in Azerbaijan"? 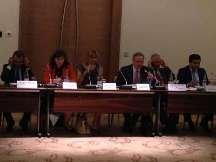 "Appeal to the problems of Information Society" was the theme of the Conference in Baku on 29 September in the framework of the project: "Freedom of expression and media in Azerbaijan" implemented with the support of the European Union. The main attention was focused on the implementation of freedom of information as part of the freedom of expression and the introduction of the European experience. According to the  head of the CoE office in Baku Dragana Filipovic, the conference is one of the activities under the Action Plan for cooperation  of the CE with Azerbaijan.

She noted that free access to information is an essential element of freedom of expression guaranteed by Article 10 of the European Convention for Human Rights and Freedoms. The goal of the project is to contribute to the development of pluralistic media in Azerbaijan.

Aflatun Amashov, the head of the Press Council said that such an event in partnership with the international organizations have not been conducted, and expressed hope that the conference will give impetus to further cooperation. He also pointed to the presence in Azerbaijan broad legal framework for the implementation of freedom of information.

Leila Marshania, a software Program Manager to support freedom of expression and media Council of Europe provided information on a specific project in Azerbaijan. The main goal is to bring the Azerbaijani legislation in the field of freedom of expression and information in accordance with the standards of the Council of Europe, to promote and improve the safety of journalists.

As part of the project (2015 -2017)  the CE intends to cooperate with relevant government agencies, local and international experts, universities, professionals, the media and NGOs.

The CE expects the exclusion of defamation from the criminal laws of the country and the establishment of reasonable and proportional measures of civil liability. It is also proposed to create an independent Legal Services to provide legal assistance to journalists. It is also envisaged to improve the quality of professional training of journalists, access to educational programs that reflect the ethical rules relevant CE standards. The aim is to promote a wider access to the Internet in Azerbaijan.

Representatives of the Justice Ministry, the Press Council and the Ombudsman's Office submitted reports on the state of freedom of information in Azerbaijan. They basically stated progressive norms of the legislation, and speaking about the problems  they complained of a violation of privacy by journalists.

However, no proposals for improving the conditions of work of journalists and access to information has been made.

The Officer  Manager Council of Europe in Azerbaijan, Parvana Bayramov, international experts Staffan Dalhoff (Sweden) and Nevena Ruzich told about European best practice of the  implementation of freedom of information.

In particular it was noted that Article 10 of the European Convention stipulates that freedom of expression includes supporting own opinions, to receive and publish  information and ideas without interference by public authority and regardless of frontiers.