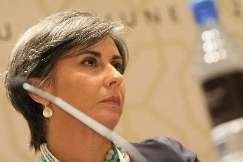 "Citizen election-observer Anar Mammadli cannot monitor the vote from inside a jail cell. Journalist Khadija Ismayilova cannot report on the campaign from behind bars. Intigam Aliyev, Rasul Jafarov, Leyla Yunus -- the list of human rights defenders and government - critics who have been made political prisoners in Azerbaijan goes on and on.

On the eve of parliamentary elections, when independent voices are crucial for having an informed debate about the country’s direction, Azerbaijani citizens will especially suffer from the silence their government has imposed,” Santos said.

The Chairperson also expressed concern regarding recent reports that opposition leader Ilgar Mammadov has been abused in prison. He was sentenced in March 2014 to 7 years in jail on charges widely considered to be politically motivated.

"I urge Azerbaijan’s leaders to engage with their citizens and with the international community in an open and honest dialogue aimed at bringing human rights and rule of law back to the country,” Santos said.

She reiterated her openness to constructive engagement with Azerbaijan’s authorities on these and other democracy-related issues.

The Chairperson further expressed hope that the Azerbaijani government will choose to abide by its OSCE election-monitoring commitments and allow the Organization to conduct full, unrestricted observation missions to future elections in the country.

The leadership of the OSCE Parliamentary Assembly cancelled a planned observation mission to the upcoming parliamentary elections after its traditional observation partner, the OSCE Office for Democratic Institutions and Human Rights (OSCE/ODIHR), was forced to cancel its mission due to restrictions imposed on its work by Azerbaijan’s authorities.