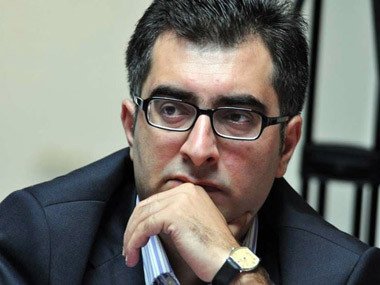 The director of the OSCE Office for Democratic Institutions and Human Rights (ODIHR), Ambassador Janez Lenarčič, has condemned verdict against the chairman of the Azerbaijani Election Monitoring and Democracy Studies (EMDS) centre Anar Mammadli. The statement is available on OSCE official website.

Note that Baku Court on Grave Crimes sentenced the chairman of EMDS Anar Mammadli to 5 years and 6 months imprisonment.

Lenarčič described the Baku court decision as an element in a campaign by the authorities in Azerbaijan to silence those working to ensure the protection of fundamental freedoms.

"Following a concerted campaign of harassment and intimidation of Anar Mammadli and his election monitoring organization by the authorities, I have no doubt that the conviction and sentence in his case are aimed at preventing him from working to defend the rights of voters,” Lenarčič said.

According to him these actions of the Azerbaijani authorities are in complete contravention of both the country’s obligations to its own citizens and its commitments as an OSCE participating State.

Isabel Santos, the chair of the OSCE Parliamentary Assembly's Committee on Democracy, Human Rights and Humanitarian Questions, as well deplored the sentencing of the chairman of Election Monitoring and Democracy Studies (EMDS) centre Anar Mammadli. The statement is posted on the organization's website.

"The Azerbaijani government's systematic targeting of civil society has reached a new low with the sentencing of Anar Mammadli. I fear that Mr. Mammadli's only crime may have been his work to defend the rights of his country's voters. His conviction and sentencing represents an affront to OSCE values in the sphere of human rights and democratic commitments," Santos said.

The chair of the committee as well added that in the next month Baku will host the annual session of the OSCE Parliamentary Assembly and expressed hope that these will encourage Azerbaijan to reconsider its attitude to OSCE commitments.

On his turn, Human Rights Watch senior expert on South Caucasus Giorgi Gogia declared that Azerbaijan’s justice system once again turned into a political tool of repression. In the statement posted on the website of the organization it is noted that the activities undertaken by Anar Mammadli don’t remain unpunished in Azerbaijan.

"It seems clear that EMDS was targeted for their critical reporting. The prosecutor general’s office opened an investigation against it a week after EMDS published its preliminary post-election report, in which it concluded that Azerbaijan’s October 9 election failed to meet international standards. EMDS wasn’t alone; the Organization for Security and Co-operation in Europe issued a report with similar findings,” the statement reads.

Summarizing Gogia emphasized that the government of Azerbaijan would be better off fulfilling the obligations it undertook 13 years ago when joining the Council of Europe. The representative considers necessary to release all the arrested activists. He calls on international community to exercise pressure on Azerbaijan.

The Norwegian Helsinki Committee as well has condemned the verdict against Anar Mammadli. The statement reads that the political character of the decision is obvious. Secretary General of the Norwegian Helsinki Committee Bjørn Engesland noted that the sentence comes two weeks after Azerbaijan took over the Chairmanship of the Council of Europe. The priorities of the Azerbaijani Chairmanship are to strengthen the Council’s work on human rights, rule of law and democracy. Only twelve days into the country’s chairmanship, Azerbaijan has failed completely in following these pillars, said Engesland.

The British Foreign office as well expressed its attitude towards the verdict against Anar Mammadli. In the statement, posted on the website of the Office, it is noted that "in Azerbaijan a worrying trend of pressure on civil society” is observed. The latest event in a series of worrying developments has become the verdict against Mammadli, while earlier the arrest of NIDA youth activists.

Foreign Office states that "his case has highlighted once again the concerns felt by many about the selective application of the rule of law in Azerbaijan. Independent election monitors play an important role in promoting a democratic society and they should be allowed to conduct their work without fear of intimidation,” the statement reads.

Note that on 9 of October Election Monitoring and Democracy Studies Center (EMDSC) implemented a monitoring of Azerbaijani presidential elections and recorded numerous law violations. In late October, the Azerbaijani Prosecutor General’s Office opened a criminal case and started investigations on EMDSC. In regard to this an alliance organization "European Platform for Democratic Elections” (EPDE) issued a statement which says that EPDE protests against the arbitrary and illegal prosecutions on EMDSC head Anar Mammadli. The alliance regrets for the measures the Azerbaijani government deploys against "independent, honest position of this organization in assessing the presidential elections in the country.”