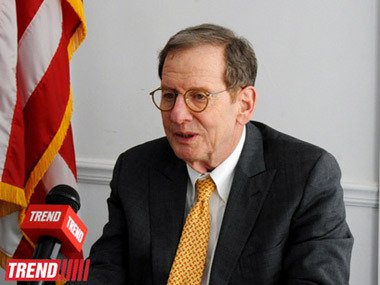 The U.S. Embassy to Azerbaijan on its official website published the statement given by Ambassador Richard Morningstar on detention of Election Monitoring and Democracy Studies Chairman Anar Mamedli. William Hague the foreign Minister of the UK, as well raised that issue during his meeting with the president and Minister of Foreign Affairs of Azerbaijan.
According to the U.S. Embassy statement, "The United States is deeply troubled by the 16 December arrest of Election Monitoring and Democracy Studies Chairman Anar Mammadli on charges of illegal entrepreneurship and subsequent sentencing to three months' pre-trial detention.”

"The details of the charges are still unclear, but we must question whether Mr. Mammadli's detention is related to his organization's election monitoring and reporting activities. We have raised this case with senior members of the Government of Azerbaijan and will continue to do so.” says the statement

The US Embassy to Azerbaijan urged the Azerbaijani government to release Mr. Mammadli immediately. The Embassy also emphasize that they will continue to closely monitor the investigation of EMDS and the International Cooperation of Volunteers Public Union”.

They discussed broad range of issues concerning political and economic spheres as well as regional ones. They touched the issues of human rights, and the cases of civil affairs.

"Our sincere and business relationships allow us to raise these issues, and we do it regularly. Our desire is to encourage Azerbaijan to make progress in this area and to guarantee political freedoms”. We continue to express our concerns in this area at the bilateral level and within the EU, the Council of Europe and the OSCE. At these meetings, we also touched specific cases of harassment of civil society activists, such as yesterday's arrest of Anar Mamedli. This same topic was discussed at my today's meeting with a group of local civic activists”, said Hague.

Note that on December 16 the Chairman of Election Monitoring and Democracy Studies Anar Mammadli has been arrested. Nasimi District Court of Baku sentenced Mammadli to three months' pre-trial detention.

Election Monitoring and Democracy Studies (EMDC) did a monitoring of Azerbaijani presidential elections on 9 October and recorded numerous violations of law. In late October, the Azerbaijani Prosecutor’s General Office opened a criminal case and started investigations on EMDC. In regard to this an alliance organization "European Platform for Democratic Elections” (EPDE) issued a statement which says that EPDE protests against the arbitrary and illegal prosecutions on EMDC head Anar Mamadli. The alliance regrets for the measures the Azerbaijani government deploys against "independent, honest position of this organization in assessing the presidential elections in the country”.

On 9 October presidential elections took place in Azerbaijan in which the incumbent president Ilham Aliyev won the elections with almost 85% of the vote, thereby taking the post for the third time. The head of National Council of Democratic Forces Jamil Hasanli was second after Aliyev with 5.5% of vote. The opposition declared that it wouldn’t accept the election results because the elections were totally violated by ballot-box staffing, "carousel” etc. OSCE Office for Democratic Institutions and Human Rights, U.S Department of State, The Minsitry of Foreign Affairs of Britain and European Parliament called the elections undemocratic and inconsistent with OSCE standards.