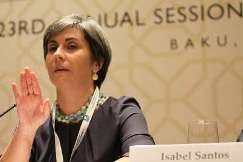 "The steady stream of threats to rights defenders and reporters in Azerbaijan continues to flow unchecked, pushing the country farther and farther away from its stated goal of democracy. The latest causes for concern are the closed-door trial of investigative journalist Khadija Ismayilova this week and the extension of the pre-trial detention of human rights activist Leyla Yunus last week. These developments only deepen the concerns of many in the international community that the authorities’ goal is to silence all independent voices, dissent and calls for accountability -- and this must stop,” Santos said.

"I renew my still-unanswered requests to visit Ms. Yunus, as well as rights defenders Anar Mammadli and Rasul Jafarov,” she added.

In letters sent to Azerbaijani Foreign Minister Elmar Mammadyarov and Deputy Foreign Minister Mahmud Mammad-Guliyev in recent months, the OSCE PA’s human rights Chair requested further information about the charges brought by Azerbaijani authorities against Yunus and Jafarov and the evidence upon which they are based, as well as the reason for the travel ban imposed against press freedom advocate Emin Huseynov. She also requested information as to why the Baku bureau of Radio Azadliq had been raided and closed by Azerbaijani authorities.

In her letter to Deputy Foreign Minister Mammad-Guliyev, Santos repeated her request to visit Mammadli, an appeal she first made to the Azerbaijani government in June 2014, and additionally requested authorization to visit Jafarov and Yunus.

Santos received responses to her letters in February 2015 that contained some limited information on the cases against Yunus and Radio Azadliq, but no information on Jafarov and Huseynov and no response to her requests for visits.

At the OSCE PA’s 2014 Annual Session, held in the Azerbaijani capital, parliamentarians from across the OSCE area approved a wide-ranging Final Declaration that contains a clause in which the Assembly "expresses concern at the misuse of administrative procedures and legislation to detain, imprison, intimidate or otherwise silence human rights defenders and critics in numerous OSCE participating States, including Azerbaijan, Belarus, Kazakhstan and the Russian Federation.”