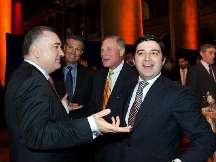 Amid a sharp and prolonged oil price slump, which has been hurting petro-states since early this year, the lobbyists in the U.S. capital are about to lose one of their lavish clients – Azerbaijan.

Over the years, representatives of the oil-rich post-Soviet country with poor human rights records have lobbied on Capitol Hill, the real financial engine of Washington, by meeting with several Congress members and other decision-makers along the way to polish up their tarnished image.

Now, however, with the decline of oil income and the country’s petroleum revenues, Azerbaijan’s lobbying money is reportedly drying up ‘like never before,’ three former lobbyists who closely follow Azerbaijan told TURAN’s Washington correspondent.

Where have Azeri lobbyists gone?

The sources, which asked to remain anonymous, referred to an unannounced suspension of high-profile lobbying campaign launched by Azerbaijani American Alliance (AAA), a group that spent approximately $10 million in Washington D.C. during 2011-2014, according to a dataset of Sunlight Foundation, a watchdog that tracks Justice Department records.

The lobby firm Fabiani & Co, major contractor of AAA in the U.S. capital, is also reportedly planning to suspend lobbying on behalf of Azerbaijan as of next month, TURAN’s correspondent was informed. (Fabiani & Co refused to share any comment for this article.)

Although the Alliance on its website continues updating the ‘news’ section from Azerbaijan, its Washington office, which is reportedly located at Fabiani & Co address, was closed since September and its phone number listed on the website (202.756.4544) ‘is just false,' as an operator that returned TURAN’s correspondent’s phone calls put it.

Anar Mammadov, AAA’s founder, a 34-year-old billionaire whose father serves as Azerbaijan’s transportation minister, registered himself in 2011 under the Foreign Agent Registration Act (FARA) in connection with his work with the Alliance. Mammadov is ‘no longer listed as a foreign lobbyist,’ Justice Department confirmed to TURAN.

Mammadov’s personal website features his expected trip to Washington early in September, albeit, according to three different sources knowledgeable about the topic, the AAA founder "never stepped in the U.S. capital since early this year.”

In 2015, AAA has spent over $1.3 million for its lobbying projects in the U.S., TURAN was informed by official sources.

Embassy pays lobbyists ‘to do its job’

Despite the uncertainty around the AAA and its founder, the Azeri government, through official channels, continues its lobbying efforts in the U.S. capital.

Early in 2015, Elin Sulieymanov, the ambassador of Azerbaijan to the U.S., signed an agreement with the Podesta Group Inc., a well-connected Washington lobbying firm, to ‘perform public relations services for the country.’

The amendment was posted on Justice Department database.

‘The Provider shall perform the Additional Services during the period commencing on February 1, 2015 and continuing through December 31, 2015.

Azerbaijan shall pay the Provider an additional twenty-five thousand dollars  (US $25,000) per month, plus expenses, for the Additional Service,’ reads the agreement.

Podesta, which guarantees Azerbaijani government’s access to some of the most powerful people in Washington, received at least $600,000 from the Azeri Embassy in 2014, plus expenses, as well as $10,000 per month for the ‘additional services,’ according to Justice Department records.

Lobbyists for foreign governments and their entities must disclose all of their income as well as their lobbying activities. The law that governs these stricter reporting requirements is the FARA of 1938.

In its supplemental statement early last year  Podesta Group listed dozens of email contacts, phone calls and face-to-face meetings that it’s initiated on behalf of the Azeri government. In 2013 alone, Podesta has made contacts with dozens of Congressional offices, members of the media and universities/think tanks.

"We were often asked: wait a second, isn’t that a job that precisely the Azeri Embassy has to do on its own?” said a former lobbyist, who agreed to talk to TURAN on condition of anonymity.

In 2014 Azeri embassy singed three other contracts with different Washington lobbyists, including Patton Boggs LLP and others.

Though politicians in the U.S. are prohibited from accepting direct money from foreign governments, it is believed that indirect funding occurred through domestic lobbyists hired by the oil industry groups, such as, SOCAR secretly paid for a controversial congressional trip to Baku in 2013.

Most recently, in July 2015, SOCAR signed a contract with two lobby groups – "30 Point Strategies, LLC,” and Global Policy Initiatives, to advise it on "public affairs and government relations matters in the U.S.” The oil company is paying hourly rates up to a monthly total of $25,000 a month, according to FARA documents.

The latest lobby contract signed by SOCAR in July, 2015appears in FARA records.

While SOCAR appears to continue playing a major role in Azeri lobbying, some ‘traditional’ players, such as Renaissance Associates, a pro-government business group based in Baku, seems to have been limiting their contracts since 2015.

Renaissance, which advocated President Ilham Aliyev’s trip to White House in 2006, used to be a long-term client of 'Bob Lawrence & Associates,’ another well-connected Washington lobbying firm.

Lobbying is not an illegal activity in the U.S. – everyone does that – yet analysts and journalists question the service that oil-reach small countries like Azerbaijan are seeking from Washington lobbyists, as instead of spending their countries’ wealth on developing their societies, they rather choose to pay for lobbyists just to pretend that they do so.

In the meantime, with their bizarre lobbying campaign, the Azeri diplomats and their paid ‘analysts ‘have long been a subject of joke in Washington D.C.

As one of long term Azerbaijani watchers describes the joke to TURAN’s Washington D.C. correspondent below: