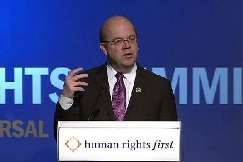 McGovern is also known as a House sponsor of the "Global Magnitsky Human Rights Accountability Act,” a bill that prohibits foreign human rights offenders and corrupt officials operating anywhere in the world from entering into the US and blocks their assets.

In his recent interview to TURAN, Congressman Smith said that he and his colleagues 'are very serious about this bill.'  'We are trying to get President Aliyev to realize that the course he and his government have chosen to repress individuals, journalists, opposition folks, does not end well.'

Smith also urged the U.S. government to raise the issues of political prisoners and lack of media freedom in Azerbaijan during their discussions with the Azeri government, and with president Ilham Aliyev personally.

If passed into law, Azerbaijan Democracy Act denies U.S. visas for senior leadership of the Azeri government and its immediate family members; those who derive significant  financial benefit from business dealings with senior leadership or their family; and members of  the security or judicial branches.

An exception is made for travel to the U.S. by officials for participation in the OSCE Minsk Group meetings related to settlement of the Nagorno-Karabakh conflict between Azerbaijan and  neighboring Armenia.